My name is Commissioner Adam Smith with the Town of Ramseur. I am reaching out to you today in regards to a property that you legally own but have abandoned in Ramseur North Carolina. We obtained this information through a title search.

We started a project called “The Rail Trail.” This is a walking Trail that lies along Deep River in eastern Randolph County and adjoins the Town of Franklinville. This project is for any and all walks of life. We welcome anyone from all over the Country to come walk our beautiful nature trail. This trail is approximately 1.5 miles of abandoned railroad in the Town of Ramseur.

With this being said, I wanted to ask if you would be willing to donate this small parcel of land to the Town of Ramseur. We would be willing to pay outstanding taxes for said parcel as well as all fees and legal fees incurred to transfer the said property. Or grant us an easement to the property so we can complete the Rail Trail project.

The property can be seen on Randolph County GIS website by using PIN number-8702513899.

The current owner listed has filed claim to this property. He does not own it and is trying to claim rights through adverse possession. He used a Quitclaim deed and deeded it to himself in efforts to sell it to the Town of Ramseur. This Quitclaim deed would be null and void in the court of law.

Randolph County Register of deeds has you listed as the deeded owner in Book 67 page 224.

You may contact me directly and I will fill you in a little more thoroughly.

Thank you for your time,

The email reproduced above was obtained as part of an ongoing public records request made by this writer on January 28, 2019. On that date I asked to receive copies of all emails sent to or from any Ramseur elected official to any person or entity regarding official Ramseur business from that day forward. 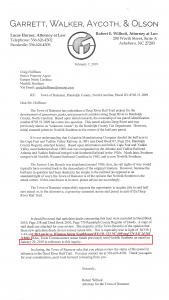 The message above raises a number of concerns, not least being the fact that it took a request from a town commissioner, based on a reference found in a letter from attorney Wilhoit’s office (also a public record), before a copy of the email was received on February 20, 2019. This is a matter of public record, not a confidential piece of closed session information, so why did it take nearly three weeks for this legally requested document to be provided as required by law?

Readers will recall the article, Rail Trail Property – The Rest of the Story, posted in this space on February 16, 2019, detailing Mayor Danny Shaw’s failure to pursue acquisition of all properties needed to complete the Deep River Rail Trail, and highlighting omissions contained in a grant application made to the Randolph Hospital Community Health Foundation.

During discussion of this issue, in open session, at the Board of Commissioners meeting on February 4, 2019, the board voted to direct attorney Bob Wilhoit to send a letter to Norfolk Southern Railway aimed at securing the property or a legal easement across it for the project. What was omitted from the discussion was the fact that Commissioner Smith had already contacted the railroad on January 29, 2019, without board approval.

At the same meeting, Mayor Shaw stated that he had initiated deed research resulting in the discovery that Norfolk Southern is the owner of the property. It seems probable that Mr. Shaw knew about Smith’s email prior to that meeting. How else would Commissioner Smith have known who to contact?

Mayor Shaw withheld the deed research from at least two other board members, evidenced by the fact that he shared copies with the entire board after the meeting was under way, as documented in the video above. Shouldn’t that information have been included in the commissioners’ information packets ahead of time?

Commissioner Grant Cheek probably knew about the research, the email, or both, before the meeting since he works in the administrative office as a town employee – taking advantage of a statutory exception that allows such conflicts of interest in small municipalities like Ramseur.

Who directed Commissioner Smith to take this action, or did he do it on his own? Either way he has established a pattern of rogue behavior that reflects poorly on his judgement and those who appointed him to the board last August, but there’s more.

Commissioner Smith made questionable statements and promises he was not at liberty to make in his message to Norfolk Southern. Perhaps worst of all was his offer on behalf of the Town of Ramseur, “to pay outstanding taxes for said parcel as well as all fees and legal fees incurred to transfer the said property.”

Who authorized Mr. Smith to make such promises? Certainly not the Board of Commissioners. They didn’t even have the opportunity to view the deed research, much less vote on the issue, until almost a week later?

As if to add insult to injury, in the last paragraph of his letter, Smith asserts, without naming him, that Commissioner David Overman, “used a Quitclaim deed and deeded [the property] to himself in efforts to sell it to the Town of Ramseur.” No such evidence has been shown.

Commissioner Smith’s actions display a lack of respect for order and authority that is completely unacceptable for any government official. It is even more troubling that Smith was not elected by the people of Ramseur; he was appointed by two commissioners and the mayor. His email to the railroad shows a lack of knowledge regarding the Deep River Rail Trail project, which Mayor Shaw has been shepherding for nearly a decade.

If Mr. Smith is as concerned about defamation of town officials as his attitude toward public criticism indicates, perhaps he should lead by example and offer Commissioner Overman a public apology while tendering his resignation.