Over the weekend I had the distinct displeasure of having a conversation on Facebook with Mayor Shaw. Mr. Shaw can be a very personable and likeable individual when he believes you are in his corner, but let him think you might not be on his side and his true colors show in a hurry. I’ve learned this first hand. Matter of fact, I’ve been hearing similar thoughts about our current mayor ever since the day I moved here five years ago.

Anyway, Saturday night I was minding my own business, watching Netflix with my wife, when the mayor decided it was time to correct a comment I made a few days ago regarding North Carolina public meetings law. In a conversation about potential conflicts of interest in having a town commissioner working in the town administrative office, answering to another employee whom he can vote to retain or dismiss, I mentioned that I thought it might be a violation of the public meetings law for the mayor and two commissioners to be present in the town office at the same time.

I knew that was a bit of a stretch, but given my own experience with Mayor Shaw last year, as well as having witnessed Commissioner Grant Cheek’s behavior (bad mouthing other commissioners and complaining about them telling him how to run his department, in front of me and town employees), I do feel like the mayor’s office is too close to the “action” and affords him many opportunities to manipulate votes on any number of issues. How many months last year were there only four commissioners present for public board meetings? At least six by my count. 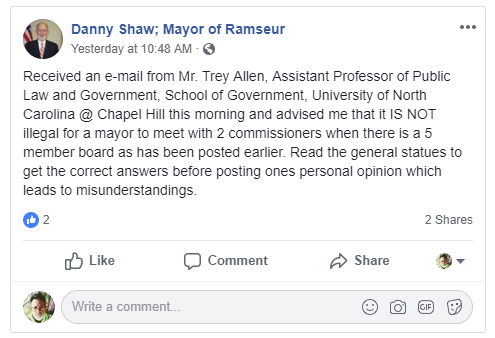 Apparently that comment worried Mayor Shaw so much that he contacted the UNC School of Government for clarification. Below is the response he received from Trey Allen, assistant professor of law and government at the school, forwarded to me as part of an ongoing request for all email communications to and from Ramseur elected officials.

“Under the open meetings law, a meeting of a public body occurs whenever a majority of the body’s members gather in person or simultaneously by electronic means to deliberate on or otherwise conduct business within the body’s real or apparent jurisdiction. G.S. 143-318.10

“The possible exception to what I’ve written above is a situation in which you and two council members form an “effective majority” of the council. Suppose there were an issue over which four members were evenly divided, with the remaining member excused from voting. You would be the tiebreaker. If you were to meet to discuss the issue with the two members whose side you favored, the three of you would constitute an effective majority as to that issue, and a court might conclude in the event of a legal challenge that your gathering was subject to the open meetings law’s public access, public notice, and minutes requirements.”

I thanked the mayor for that clarification and pointed out how he had conveniently omitted the part about split votes and tie-breaking in his post, as you can see in the image above. Mr. Shaw has a habit of selectively telling the truth; leaving out parts that might not further his agenda. I also explained in my comments why few people ever call or visit Mayor Shaw for answers to their questions anymore, because, in my opinion, nobody likes being misled and manipulated. By now most people in Ramseur have either witnessed that behavior first hand or know someone who has.

From there the conversation began to slide off the rails towards ad hominem attacks and other assorted cheap shots that I’d rather not participate in, but like any human, I sometimes find myself there. Last week I removed a block I’d placed on Mr. Shaw’s personal account last August, but by the end of the evening Saturday night I decided that perhaps doing so had been a mistake. I can still see anything posted on the mayor’s official Facebook page, but he and I can’t see each other personally unless a third party captures an image and shares it, or someone stoops to using fake identities as some of the mayor’s supporters did during the race in 2015.

I went to bed Saturday night and tried to forget about it; no use dwelling on what we cannot change, right? Well, this morning I found a private message alerting me to this post our “honorable” mayor made late Saturday night.

Isn’t that just precious? Now I’m a “Washington DC” Democrat, come to Ramseur for the express purpose of “thrashing” elected officials. Okay, I’ll play along, and for the sake of full disclosure I’ll tell anyone who asks, yes, I have been a registered Democrat for most of my life. In fact, my wife is an officer of the Randolph County Democratic Party, and currently the president of the Democratic Women of Randolph County. I am currently registered as an unaffiliated voter.

I made that change earlier this year because I am sick of the divisive politics that dominate our country, our state, and our county today. Partisan politics has no place in municipal elections, especially in a place as small as Ramseur.  Here there are no Democrats or Republicans, or shouldn’t be. Partisanship like what Mayor Shaw exhibited overnight does nothing to solve our problems; it serves only to divide us, and leads to a civil war mentality among neighbors, friends, and families. I think we’ve all witnessed that fact first hand in the last few years, regardless of where we stand on any given set of issues.

The image above ended up being posted in several places overnight and this morning. I responded to it where I saw it first, on the Ramseur WatchDog 2 Facebook page. 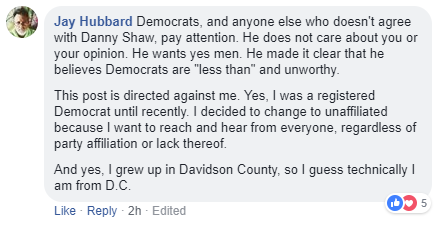 I encourage everyone to go read all the comments, including additional remarks left by Mr. Shaw. Even if you don’t have a Facebook account you should be able to view that public conversation. I stated before that I had no intention of running for office again this year, and I still don’t want to, but when push comes to shove I will do what is necessary. I would be very interested in speaking with and meeting anyone who might be considering running for either a commissioner’s or the mayor’s seat. Drop me a note and let’s be the change we want to see in Ramseur.