Why So Many Accounts Commissioner?

This website has one purpose: to educate and inform the citizens of Ramseur about what their local elected officials are doing, and to call those officials out when what they’re doing isn’t transparent, accountable, or ethical. Okay, maybe that’s more than one thing; I’m not an accountant.

One of the first things I did after building this website was to make a public records request. I live on Church Street, just down the road from Sunset Knoll, cemetery. The cemetery is one of the two departments Commissioner Smith inherited when he was appointed to our Board of Commissioners.

In the weeks after Smith’s appointment last summer, I noticed a lot of activity at Sunset Knoll. Some of the work being done was needed, but some of it seemed to take longer than it should to complete. Other tasks seemed unnecessary while other projects exhibited amateurish skills at best.  I wanted to know how my tax dollars were being spent, so I requested the documentation.

In fact, I requested what might properly be described as a truckload of documents, and in my ignorance I asked for them under the federal Freedom of Information Act. A few days later I received a letter, emailed from attorney Bob Wilhoit’s desk, explaining that my request would not be honored and outlining the proper statutes to use.

I contacted our Town Clerk, Bobbie Hatley, and refined my request to fit North Carolina law. In fact, I offered to reduce my request in exchange for one specific document immediately: the Randolph Community Health Foundation grant application for funding phase two of the Deep River Rail Trail. Ms. Hatley complied, and as promised I reduced my request to only the invoices related to Smith’s spending on the cemetery. A few days later I got my records.

A few weeks later someone informed me that Commissioner Smith was still pushing the Free Speech issue in an email he sent to attorney Wilhoit. Smith was trying to shut down what he called “third party websites,” so I requested a copy of that email. In that message, Mr. Smith targeted me by name. It’s too bad Smith couldn’t be bothered to learn my proper name, but details, like facts, rights, and boundaries, don’t seem to matter much to Commissioner Smith. 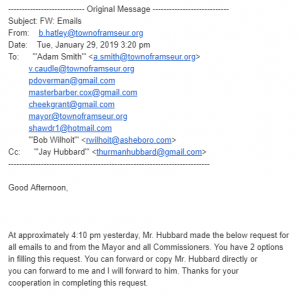 After reading that message I decided that perhaps I should keep an eye on what Smith and his peers on the board were talking about, so on January 28, 2019, I wrote an email to Ms. Hatley, which said:

“In accordance with NC Public Records Act, please forward all emails to or from the mayor and all commissioners beginning 1/28/2019, inclusive, to me.”

Ms. Hatley forwarded my message to the commissioners, the mayor, and Mr. Wilhoit the following day, and soon I began receiving copies of every email Ms. Hatley sent or received, which wasn’t part of my request at all, including lots of spam and sales flyers. Commissioner Caudle soon emailed me and stated her willingness to comply with my request, and I have received her emails ever since.

On February 5, 2019, after about a week of being inundated with messages that were at least 50% junk, I revised and clarified my request as follows:

“I am requesting every email, whether sent on a Town account or a private account, to or from any member of the Board of Commissioners, involving or mentioning Town of Ramseur business. So far only Commissioner Caudle has complied. If the mayor or any commissioner sends an email to any other town official, or attorney Wilhoit, or our county historian, or any person, unless it relates to a personnel matter or other subject which would typically be discussed in closed session, I am requesting to review a copy of said correspondence, as is my legal right. This request applies to any correspondence to or from any and all commissioners and the mayor with any individual(s) if Town business is mentioned. This request also covers any correspondence to or from the water billing clerk, as well as any vendor or contractor working for the Town. If you have any questions please do not hesitate to contact me. Reading your spam has been interesting, but is not required.”

Not my best writing, I’ll admit, but the spam stopped immediately, and soon I began receiving emails from the mayor as well.

Most of what I’ve received from Mayor Shaw has been subscription links and meeting announcements, but I was still only receiving messages from him, Commissioner Caudle, and Clerk Hatley. I have yet to receive any emails from most of the other commissioners.

In fact, since making my initial request I have received only one email directly from a commissioner other than Mrs. Caudle. On February 14, 2019, Commissioner Cox sent a message to his fellow board members, Mr. Wilhoit, and Ms. Hatley, regarding a banquet for firemen. That message, with the complete email addresses of all recipients, including my own, is reproduced below:

Good afternoon all,
It has come to my attention that some of the commissioners feel the need to attend the firemen’s banquet Saturday night! This banquet is a yearly event put on by the fire department. This is not a retirement dinner for Jay. The dinner is by invitation only if you are not a fireman. If you did not receive an invite then you are not to attend. Myself and mayor Shaw is the only 2 outside the department that has been invited. The only reason Danny was invited is because he used to be a fireman. This event is paid for by each individual fireman. I feel this gives them right to invite who they wish.

Due to open meeting laws this is how it must be. They were aware of that fact, and sure it had bearing when the decision was made on invitations.

Feel free to contact me with any questions. I do plan to honor Jay in our next board meeting. That part keep quiet for now plz!

Mr. Cox is mistaken about the public meetings law; it does not forbid elected officials from attending social functions as long as local  government business is not discussed, but that’s a subject for another day.

In looking at Mr. Cox’s email I noticed something unusual: Commissioner Smith’s email address was listed as adamsmith.tor@gmail.com. I had previously seen several emails sent to and from Mr. Smith’s official account, a.smith@townoframseur.org, and I found this behavior odd, so I did what any good watchdog would do; I started digging.

So far I have discovered at least three email accounts Commissioner Smith uses for Town of Ramseur business. Mayor Shaw also uses two email accounts; one official (mayor@townoframseur.org) and one personal (shawdr1@hotmail.com). That is not illegal, per se, but doing so leaves them vulnerable to ethical questions and looks very unprofessional. Three of the other commissioners are still using Gmail accounts rather than the accounts we taxpayers pay for as part of the website hosting agreement.

Prior to April or May of 2018, I am aware of a technical issue that prevented elected officials in Ramseur from using anything but personal accounts for email communications, but that issue has been resolved. At this point – especially since Mr. Smith joined the board last August, and his official account obviously works – there is simply no excuse for our elected officials not to be using their official email accounts for all public business. It looks much more professional to use an email address that matches the town’s web domain when corresponding with people and officials outside our community.

Commissioner Smith’s use of multiple accounts, and the manner in which he uses them, is cause for great concern. I use several email accounts, and there’s nothing peculiar about having more than one. I have one account for personal use, one for my business, another I share with my wife for our artistic endeavours, an old one I use for surveys and subscriptions, and even one I created for this website.  Having multiple accounts makes it easier to keep various business and personal subjects organized; it’s a smart business practice.

What is troubling about Mr. Smith’s multiple accounts is that he doesn’t appear to be using them in that manner. Instead, he has used at least three different accounts for Ramseur government business. In fact, the pattern I lay out below looks like a deliberate attempt to evade lawful public records requests.

Recall that Commissioner Smith used his official account for an email sent to Bob Wilhoit on Monday, January 21, 2019, but used a different account (ronsmith8859@gmail.com) to send a trademark application earlier that month. The several dates scattered throughout that document set make it difficult to pin down a definitive date on which the documents were submitted.

Smith used a third different account for an email he sent to Southern Railway at 7pm on January 29, 2019. That particular message is perhaps the most troubling of all, because it was sent three hours and forty minutes after Clerk Hatley forwarded my request for all emails to all the commissioners and the mayor.

Mr. Smith’s use of multiple accounts for official town business is problematic at best. It appears he may be attempting to circumvent public records rules which is not just unethical, it’s illegal. If that’s the case, Mr. Smith could end up costing the Town of Ramseur far more than he saved us on his low-budget bricklayer last summer.

When Commissioner Smith was appointed to the Board of Commissioners last August, he was elected by exactly three people: Commissioner Grant Cheek, his next door neighbor; Commissioner Randy Cox, who lives illegally in a travel trailer downtown; and Mayor Danny Shaw, who has a well documented history of ignoring Robert’s rules of order and omitting details when either furthers his personal agenda.