As a follow up to my posts written over the last few days regarding our water and sewer department, here are a few documents I received this week. All images in this post should enlarge to a readable size when you click on them. 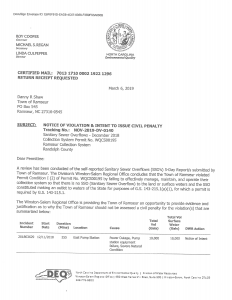 First we have a Notice of Violation the Town of Ramseur received for a raw sewage spill that occurred last December during a power outage. I recall the board voting to spend money having a Vietnam War era military generator at one of our pump stations repaired around that time. I do not know if the spill occurred at the same pump station where the generator was apparently out of service.

debated, and wondering why some members of the board were unwilling to spend a few more dollars to purchase a new commercial generator that could be serviced and maintained by any number of vendors as opposed to buying another ancient piece of equipment that can only be serviced by Mr. Delk.

Given the glowing budget report we received a few days ago, we definitely had the money, but Commissioner Cheek apparently didn’t think that was an option. 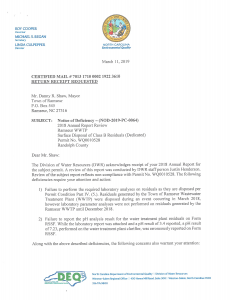 The Town of Ramseur received a second letter from NC DEQ this week, dated March 11, 2019. This letter was sent to notify town officials of deficiencies found in a review of our annual water quality report submitted to the state. 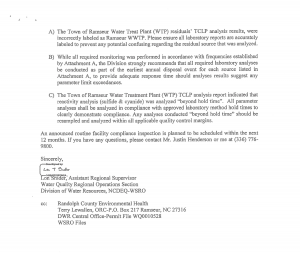 difference in reporting of this nature.

Perhaps the most troubling concern involved something called a TCLP analysis. TCLP stands for toxicity characteristic leaching procedure, which you can read all about here.

The state inspectors expressed concerns with a reactivity analysis for sulfide and cyanide that was done “beyond hold time”. The samples for this test sat too long, and if the sample sits too long, a reasonable person might safely assume that the results will not be accurate. Troubling indeed. 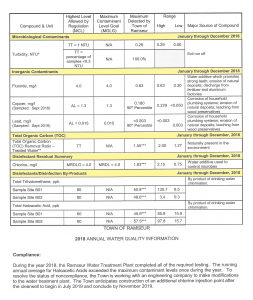 Earlier today I also received a copy of the full annual water quality report for 2018, which will probably be published by town officials in the coming weeks. I do not pretend to have the scientific background needed to analyze those numbers, but I would draw your attention to the paragraph at the bottom of the report that references some concerns raised in my post about haloacetic acids (HAAs) in our water.

It appears we have deficiencies in both management and communication here in Ramseur. It is my belief that most of these shortfalls would be reduced, if not eliminated, if our town employed an experienced administrator to oversee the operation of the various service departments taxpayers demand from local government.

Contrary to what some might have you believe, a competent administrator would not take power away from our governing board. Having a paid professional on staff to manage departments and advise the board would help our elected officials make better, more informed policy decisions and keep many important issues like these from being neglected or swept under the rug.