Smith Makes The Right Choice… For Once 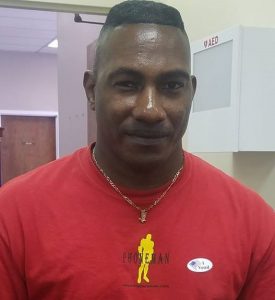 Regular readers of this blog may recall that for the past several months a slim majority of the Ramseur Board of Commissioners has been working overtime to find a way to force a local business owner, Tim Matthews, to remove artwork from the side of the Boost Mobile store facing Carter Street downtown. The artwork was placed on the building six years ago, and Mr. Matthews paid for permits time and time again, for these and other signs he has since been forced to remove. Meanwhile other business owners all over town were being granted variances, exceptions, and other special treatment for sometimes much bigger zoning violations.

At the March 4th meeting, a vote was held on the question of whether the Phoneman image and a smiley face should be considered artwork. At that meeting Commissioner* Smith was absent without leave and the votes were evenly divided, forcing Mayor Shaw to break the tie. Mr. Shaw told Tim Matthews at that time that if Dennis Pinnix, a code enforcement officer contracted by the town, would recommend calling the paintings artwork that he would change his vote.

Mr. Shaw knew full well that a month after the fact he would not be able to make any such change, but he said it anyway, like so many other distortions  of truth he’s earned a reputation for over the years. You can hear the mayor’s remark that night just after 13:40 in the sound clip below.

At the April 1st meeting the issue was again brought to the floor, with Commissioner Overman once again bringing forward a motion to accept the paintings as artwork. Predictably, Commissioners Cheek, Cox, and Smith quickly voted against that motion, but Tim Matthews and many others in attendance were having no more of this nonsense. Mr. Matthews demanded the right to address the board, and he refused to take no for an answer. 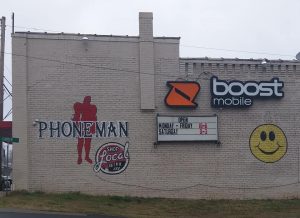 Mayor Shaw did everything in his power to shut down the conversation. He very conveniently had a copy of a statute he could use to have audience members ejected or arrested for interrupting the meeting. Fortunately his attempt to intimidate Mr. Matthews and others met with equally determined resistance and cooler heads prevailed when a motion to let Tim Matthews speak was made and carried.

Tim Matthews took the podium and again made an impassioned plea for nothing more than equal treatment and common decency, pointing out the amount of time his artwork had been on the building and the exceptions this board has made granting leeway to many others, including a sitting commissioner who has lived in open defiance of local ordinances and state housing standards for roughly three years.

It turns out that between the March and April board meetings, Mayor Shaw had spoken with Mr. Matthews and several, if not all, of the commissioners, and a majority had privately agreed to vote in favor of Tim’s artwork. For whatever reason, those off-the-record promises were broken when the board voted that night.

Eventually Mr. Wilhoit, our town’s attorney, interrupted the proceeding and read from the code enforcement officer’s monthly report, “ALL SIGN VIOLATIONS AT THIS PROPERTY HAVE BEEN ABATED if the paintings on the wall are considered artwork. It is my recommendation that the painting be considered Artwork as long as no writings on them are promoting a business.”

I’m almost surprised that Mayor Shaw didn’t threaten to remove Mr. Wilhoit from the meeting like he did me when I delivered a copy of the same document to Mr. Matthews while he was speaking, but the important thing is that at least one commissioner finally came to his senses and broke away from the mayor and his puppets.

Commissioner* Adam Smith moved that the Board reconsider the question and when the vote was called a second time he switched positions voted in favor of allowing the artwork to remain. That action does not earn Mr. Smith a pass for several other poor decisions and misbehavior he’s made since his appointment, but I believe in giving credit where due. On this night, Adam Smith did the right thing and I hope this is the last we hear of this issue.