On Monday April 1st, 2019, citizen J.C. Parish addressed the Ramseur Board of Commissioners regarding two issues: the recent trademark application and out of service fire hydrants around town. 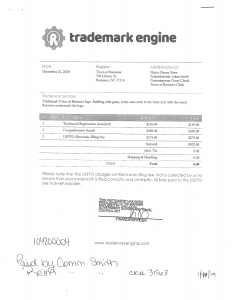 Regular readers of this blog will recall that late last year Commissioner* Adam Smith took it upon himself, without board approval, to submit an application to trademark the name of our town, the slogan, “Where Family and Friends Meet”, and an image created by local artist Kerry Lindley, which appears on many official signs around town and has come to be seen as our town’s logo. Smith even paid the nearly $1,000 application fee out of his own pocket and was reimbursed by the Town Clerk before all board members were made aware of his activities.

Since then the board has voted to have attorney Wilhoit “look into” the matter, whatever that means (they have a bad habit of using vague language such as this at every opportunity).  At last report Mr. Wilhoit was waiting to hear from an attorney in Greensboro who specializes in trademark and copyright law. I have not seen any written communication about this issue, meaning that no further correspondence has been received nor discussions held, unless those involved are deliberately avoiding email communications in order to keep citizens in the dark.

During an exchange with Mr. Smith, Mr. Parrish pointed out that the application was made without permission and requested the Smith return the money he was reimbursed. Smith at first insisted that the board had approved his actions, but Commissioner Caudle set him straight, detailing the chain of events and the fact that the board never voted for any action to be taken. Smith then stated that if he returned the funds he was reimbursed for the application fee that he would retain ownership of the trademarks if they are ever approved.

Attorney Wilhoit had nothing to say about this, which I found very odd since he reported at the last meeting that he was waiting for an opinion from another attorney. I would have expected him to report any communications he had received, or the fact that he was still waiting. Would it not be appropriate for the attorney to report his progress on this issue during this discussion?

Mr. Parrish then turned to the subject of fire hydrants, because there are many of them out of service around town. Last year I addressed the board on this subject. At that time there were almost a dozen that were known to be non-functional and Mr. Cheek stated then that there was no money in our budget to make the necessary repairs.

Fire hydrants exist for one purpose: fire protection. One would think that since our mayor is a former firefighter this issue would be high on his list of priorities. One would also imagine that Commissioner Cox, responsible for our police and fire protection services, would be pushing to have this issue resolved as well, but neither seems to be interested. 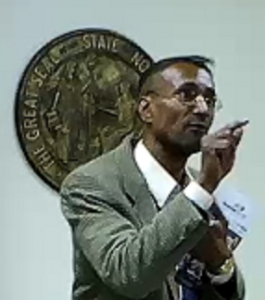 Grant Cheek informed Mr. Parrish that there is only money in our budget to repair one fire hydrant per year.  A few minutes later he all but bragged about how his department is ahead of schedule because they fixed four hydrants during this fiscal year. I think it’s worth noting that the almost all of the hydrants that have been repaired or scheduled for replacement are located on or near Elam Avenue and Huntingwood Road, neighborhoods where the mayor and Commissioners Cheek and Smith reside. It’s almost as if it doesn’t matter to these officials if the rest of the town burns to the ground.

To Mr. Parrish and others in attendance that night Mr. Cheek’s explanation was unacceptable. Yes, these fire hydrants did go out of service over many years, but budgeting funds to restore only one per year is not an acceptable solution; it’s an insult.

During a recent report on the 2017-18  budget audit, the board was informed that the water/sewer enterprise fund was in “great shape” and finished the year with a surplus of over $130,000. If, as the mayor later said, those funds have already been spent, where were they spent and why were they not spent on repairing and maintaining our fire protection system? I think we’d all like to see some real figures to back that claim and justify why keeping our fire protection system maintained in all parts of town isn’t a higher priority.