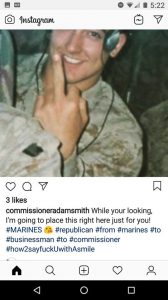 On the afternoon of March 4th, 2019, our neighbor, Denise Lowe, paid a visit to the Ramseur Municipal Building. There she found Commissioner* Adam Smith huddled with Grant Cheek behind Commissioner Cheek’s desk. At that time of day Commissioner Cheek should have been on the clock as our water billing/deputy town clerk, so what these two were discussing or reviewing was probably not related to Mr. Cheek’s daytime office duties, but that’s not the point of this report.

I was not personally present to witness these events, however first hand accounts given by Denise Lowe and Commissioner David Overman match up and corroborate each other. Commissioner Caudle also requested that video from the office security cameras be preserved on the day of the incident. I have not requested or reviewed that video yet but at this point, no one involved has come forward to deny the following allegations.

Denise Lowe struck up a conversation with Commissioner* Smith about his departments and offered any assistance she might be able to provide. She also asked again about the paint Smith purchased last fall for a project at the cemetery. At some point Mr. Smith snapped and lashed out verbally at Denise Lowe, calling her some pretty foul names and using language that would make most citizens of Ramseur blush.

The incident was witnessed by Commissioner David Overman, who had just entered the building to pay his water bills. Mr. Overman finished his business and exited soon after since three commissioners should not meet to discuss town business without proper public notice being given, and given the situation local business was being discussed.

Later that night, at the beginning of a budget audit presentation, Mayor Shaw announced that Mr. Smith was on the verge of tendering his resignation from the board. This was the third time this reporter had heard rumors to that effect, and in my opinion that would still be the wisest thing Mr. Smith could do given his record of rogue behavior, blatant attempts to skirt public record requests, and personal history of anger issues. At the close of the regular board meeting that night Mayor Shaw, angry about questions of quorum and public meetings laws, reiterated that Mr. Smith had not officially resigned as of that moment.

Over the following weeks Denise Lowe demanded public apologies from both Smith and Mayor Shaw, and voiced  her desire that Smith vacate his seat on the board. Mayor Shaw was asked to publicly apologize on behalf of the town because, as mayor, he is the civic face of our government. The mayor speaks for the town, it’s in the job description, but Mayor Shaw either couldn’t or wouldn’t understand that point and steadfastly refused to do the right thing. It should also be remembered that Mr. Shaw was the crucial tie-breaking vote on the night Smith was appointed to the board, so in a very real sense he is responsible for Smith and his numerous missteps since joining our board of commissioners.

At the April 1st board meeting Denise Lowe, allotted official time to speak on the meeting agenda, again demanded apologies from both men as well as Smith’s resignation. Mr. Smith finally owned his behavior in pubic, stating that he felt he was being personally attacked and giving that as an excuse for his poor judgement. Afterward, Mayor Shaw apologized for Smith’s behavior, but not his own, revealing once again that Mayor Danny Shaw has either lost touch with the purpose of his position, or never fully understood it to begin with. The subject of Smith’s resignation was not brought up by either man that night.