“Half Facts And Truths Cause Misunderstandings”

After my last post, about the Highway Forty-Nine water line project, Mayor Shaw saw what he must have thought was a golden opportunity to shame the Watchdog.

I omitted some information I did not have, about where the proposed pipeline will end near Old Staley Road, about two miles north of Eastern Randolph Road. With all the talk about looping the water line at the high school during the recent board meeting it was an easy thing to overlook, if it was mentioned at all. I appreciate clarifications. 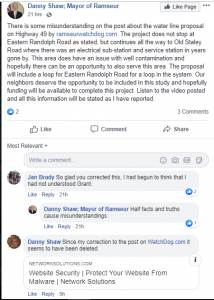 Since the mayor brought it up, let’s talk about the total lack of official information readily available to the pubic about this project, which was proposed at least three years ago.

Why isn’t there a map of this proposed pipeline on view at the post office, or the library, or the municipal administrative office? Why hasn’t the mayor’s administration posted anything anywhere in town over the last three years about this project?

It’s almost as if this project – which would provide clean drinking water to a community of people who are currently living with poison contaminated wells – isn’t important to Mayor Shaw, unless there might be a big fluffy pile of money involved. Watch the video; that part always gets his attention.

Is anyone really surprised that most people here haven’t been fully informed? We’ve heard bits and pieces here and there, but if this project really mattered to elected officials in Ramseur it would never have gone dormant for as long as it has. The only reason the project is getting any attention now is because a group of committed community leaders from outside Ramseur proper made our elected officials listen. It’s almost as if they don’t want us to know what’s going on, or is that just me?

This pipeline needs to be built and that was my main purpose in writing about it a few days ago, because the only way it gets built is if people participate in every survey and attend every meeting, and drag their neighbors with them until it’s done. The next meeting about this project is Saturday, May 25th from 4-6 pm, at the Ramseur Municipal Building. Be there. 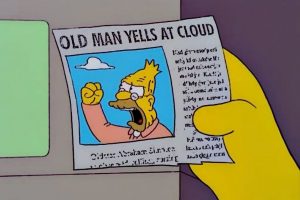 As if finding my omission and publishing a clarification wasn’t satisfying enough for our middle school mayor, he went back online again a little later to review his handiwork, or perhaps to view a meeting video – I’m told that Mayor Shaw watches the meeting videos obsessively.

On his way back to this website, Mayor Shaw made a mistake most ten year olds would catch: he typed the website name in wrong. Most people would have bookmarked the site address or added it to a favorites list by now, but not Danny Shaw. He’s old school. He’s gonna type that web address in for himself every time.

When the Internet sent him to whatever is hosted at watchdog.com, smarty-pants Shaw jumped at what he thought was another chance to shame me, this time for deleting a post.  Without slowing down long enough to realize his own mistake, Mayor Shaw rushed headlong into showing us all just how little he really understands about how the Internet and information technology in general really works. I have not, nor will I ever delete a post from this website. I have edited the other post for clarity.

Also, request records. It’s your right. I can’t be everywhere. I have a family and a home and a business or two to run outside this space. If you receive an email from a public official or a copy of a project map from the mayor, please, send it in. Next time the topic comes up we’ll all be better informed.