Time For The Good Old Boys Club To End

Last week our town clerk, Bobbie Hatley, resigned to take a better job in another town. The board held a special meeting on Friday, July 19, two days after Ms. Hatley clocked out for the last time, and voted to hire a retired clerk, Melody Hancock, from Randleman, to fill the role of interim town clerk beginning this week. Sadly, for reasons we may never know, that plan fell apart at the last minute.

I was informed earlier this week that our attorney, Bob Wilhoit, called Mayor Shaw last Sunday night and informed him that Mrs. Hancock had decided to decline the Board’s offer. I tried to verify this, and in an email, sent to Mayor Shaw on July 23, I wrote, “I understand that Melody Hancock decided over the weekend that she is not willing to be our interim town clerk. Is that true? Was any reason offered?”

“Since we do not have a town administrator or manager, and elected officials are barred by statute from acting as administrator/manager, even in a temporary capacity, who currently holds the keys to the clerk’s office and the vault? Who has access to those locations and the records stored there?”

I even thanked the mayor in advance for answering my questions. Here’s the response I received back, sent a few minutes before 5pm the same day, “Any legal matters concerning the Town of Ramseur needs to be referred  to our attorney.” 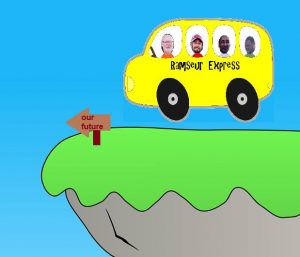 I fail to see why either of my questions would require the services of an attorney to answer. Either the interim clerk showed up for work as scheduled or she didn’t. If she didn’t, did she call Mr. Wilhoit and decline the offer as my source indicated, or was it communicated in some other way. I asked a very specific yes or no question which was not subject to any confidentiality rules, and asked whether any explanation had been offered.

As for my other question about who has access to the clerk’s office and the vault, where important documents are stored, that wasn’t a legal question either. Who controls access? Mayor Shaw? Grant Cheek? Someone else? The mayor outright refused to answer my questions. I did forward my questions to the town clerk email address, which I know is being monitored, and asked that my enquiries be directed to Mr. Wilhoit, as the mayor instructed.

This morning, July 25, I received another response from Mayor Shaw. He wrote: “At this time all commissioners have keys to the outside doors at the Municipal Building and myself and Commissioner Cheek are the only ones who have keys to the office and safe. Hope this will answer any question you have. I have no real answer as to why Melody turned down the temporary position here at the office and will not speculate.”

I won’t speculate on why Mrs. Hancock decided not to take the job either. I do have a few ideas, but why really doesn’t matter now. What’s important is the fact that Mayor Shaw and Grant Cheek have unfettered access to our public records and no one is there to hold them accountable. This should deeply trouble every citizen of our town.

Even though we technically qualify for exemptions due to our small population, the intent of several statutes under Chapter 160A of the N.C. General Statutes is clear: no elected municipal official(s) should be allowed to become a de facto town administrator, even temporarily. We’re on a slippery slope here folks.

In addition to not having a town clerk, we are also without a finance officer and a zoning administrator; and those are only the jobs I know Ms. Hatley was doing. She was our de facto town administrator, and we have no one filling her role at this time. Planning and zoning consultant Jill Wood has been helping out where she can, but for the most part we are left with Mayor Shaw and Commissioner Cheek running the office. That’s not how it’s supposed to be done.

If the board had been willing to review the resumes Commissioner Caudle sent to her peers on the board prior to the July 19 meeting, we might already have a qualified replacement, but Mayor Shaw stated then that he felt the board should not even look at those candidates if they were going to pursue the Piedmont Triad Regional Council contract to find a new clerk. It’s almost as if that decision was made before the meeting began.

Some may find my concerns over who has access to the clerk’s office, her computer, and all the administrative and legal records stored in the secure areas of the office a little paranoid, but beyond my personal experiences with a few of these folks last summer and on the campaign trail four years ago, I have other valid reasons for concern.

For example, a few weeks ago, on July 11, the North Carolina Department of Labor conducted an Occupational Safety and Health Administration (OSHA)  inspection in Ramseur. As part of the inspection, records from 2015-2018 were requested, including all records of reportable on the job injuries resulting in employee days away from work. Some of the records required could not be located. Anyone who regularly deals with legal records of any kind knows that such documents must be preserved for a period of time, typically five to seven years, so where are the missing records?

Clerk Hatley left her position with the Town of Ramseur while this inspection was in process, so Mayor Shaw was designated as the primary contact for the Department of Labor to finish their work. I have obtained several emails received by the mayor from Mr. James Dempsey with N.C. Dept. of Labor regarding the missing documents. I think my fellow citizens will find these emails both interesting and disturbing.

I am contacting you as directed by the email below. As directed by our OSHA Operational Procedure Notice (OPN128T), at time of inspection (July 11,2019), I requested OSHA 300 logs and 300A Summaries for the years 2015, 2016 and 2017 from Ms. Bobbie Hatley but she was unable to produce these documents. (She did provide the information for 2018 OSHA 300A Summary which was also requested.) Ms. Hatley stated that the 300A Summary information had been sent electronically to NC OSHA for the years 2015-2018, however the Town of Ramseur did not retain copies of the 300 logs and 300A Summaries as required by OSHA 29 CFR 1904.33 which requires the entity to store these records for 5 years. Ms. Hatley stated initially that she recollected that no employees sustained a recordable injury or illness during those years, however, later determined that an employee was injured in 2016. The Town of Ramseur reported to NC OSHA that injury from 2016 on their 2016 OSHA 300A Summary which resulted in a DART (Days Away from Work or Restricted Activity) rate for 2016 of 6.55 which precipitated this inspection.

When Ms. Hatley informed me that there was a recordable injury in 2016, I requested that the OSHA 300 logs and 300A Summaries for 2015-2017 be provided. As yet I have not received these documents. Please review your records (worker’s compensation and any other sources) for 2015-2017 to determine if there were any other recordable injuries/illnesses for that time period. Per OSHA 29 CFR 2004.40, these documents are to be provided within 4 business hours of the request which was initially done on July 11, 2019.

If you need any other information, or have questions please contact me. I understand you have experienced a loss of staff in the past few years.

This was followed by a series of emails between Mr. Dempsey and Jill Wood, who indicated that, “We have completed the forms to the best of our ability.”

Again, Jill Wood is to be commended for stepping up and wading into this mess. Even though she lives outside Ramseur’s corporate limits, like most of us, she wants to see Ramseur become a thriving, healthy place we can all be proud to call home. She’s probably the only human being preventing the town’s administrative office from devolving into total anarchy right now.

A response from Mr. Dempsey was received on Monday, July 22, the text of which is reproduced below.

As a reminder, whomever at Town of Ramseur will be responsible for these documents going forward should get familiar with OSHA 1904. The text of this document will answer a lot of questions that may come up.

Why am I not surprised that records having to do with Mike Campbell are the ones that just happen to be missing? Recall that Mr. Campbell was an elected commissioner several years ago, and he was forced to resign his seat on the board in order to become an employee of the town in our public works department.

Remember also that there existed, at that time, an exception in North Carolina’s general statutes that allowed Mr. Campbell to remain on the board and to be a paid town employee. Commissioner Grant Cheek has been allowed to exploit that exception for most of the past four years, as our water billing clerk; a position that creates several very real conflicts of interest, both in the administrative office and as the lone commissioner in charge of several of our most important service departments.

Mayor Shaw was an elected official when both these decisions were made, and while he’ll tell you he was not in favor of Mr. Cheek being hired into the office, I haven’t heard him complaining about the potential problems since it was done. In fact, I’m certain he’s come to find the arrangement beneficial most days.

I cannot imagine a better argument for why the Town of Ramseur needs to have a full time town manager or administrator. If we had a professional in charge of day to day operations there’s a good chance that the missing OSHA records wouldn’t have been lost.

Even if we can’t afford a full-time administrator, there are other ways of organizing our government, such as  putting more than one person in charge of each department, that would mitigate many of the problems we have today.

Commissioner Caudle offered just such a plan shortly after she became a commissioner almost two years ago, but the mayor and his minions, Cheek and Cox, could not even see fit to have a fair, open-minded discussion of her proposal.

We’ve been held hostage by the ‘good old boys club’ in Ramseur for far too long. No single commissioner nor the mayor alone should have sole responsibility for any of our service departments, including the administrative office, but that is essentially how this town has been operated for years. It may have worked well in the past, but it serves only to divide us and stands in the way of progress today.