Why I Decided Not To Run For Office

When I started this blog back in late December of 2018, I stated in one of the first posts I published that I had no intention of running for office in Ramseur this year. Over the next few months many friends and neighbors sent me messages encouraging me to change my mind. Others told me much the same in person when I encountered folks on the street. I must admit, I was tempted.

I thought long and hard on the subject and even went as far as writing up a document that a few of you may even have seen, explaining why I had changed my mind and decided to run. Over the last several months I’ve realized a few things that made me decide to stick to my guns and remain where I am, at my keyboard.

Like many of you I have lots of ideas that I believe would result in better, more effective local government for our little town, but I can express those ideas and explain their merits far better from here than I ever could behind a desk in a meeting. I express myself better with printed words than I could ever hope to speaking, either one on one or to a group.

I also realized that in this climate of ideological factionalism and dirty politics –  which we’re already beginning to see in the mayoral contest – I’m not willing to bite my tongue and play nice for the next few months while others spread lies and ugly rumours. I have more integrity than that, and refuse to play that childish game.

I’m proud of the campaign I ran four years ago against Mayor Shaw. I took him to task on a number of issues, such as when Ramtex asked to negotiate a lower sewer rate and got turned down flat. Shaw was a commissioner then; it was a legitimate issue. That decision resulted in the loss of roughly 800 jobs in Ramseur.

I offer that example because it was a legitimate issue that needed to be remembered when voters were weighing their choices. It certainly wasn’t  mudslinging or a personal attack. Dragging around copies of out of context quotes stolen from a person’s social media account, and using them to paint a person as “anti-police”, or a Satanist, as was done to me by the mayor and his operatives; that’s what I call mudslinging. My character was slandered during that race. It took most of the next four years before I finally discovered which of my neighbors were responsible.

Mayor Shaw needs to go home when his current term ends in a few months. I also hope that together we’ll cast enough votes for to send Mr. Cheek and Mr. Smith back to their homes on Elam Avenue, and replace them with better people this November. I will be offering my opinion on the commissioners’ races at a later date.

I was almost convinced; I was preparing to run, but then I realized that I have as much or more influence right here behind this keyboard as I could ever have holding any elective office in town. For example, a week or so ago I wrote about how Church Street, where I live, looks pretty sad these days. The asphalt is cracked and beginning to come apart, and there’s a big hole in the edge of the roadway up the street that’s been ignored by Mr. Cheek’s public works department for about four years now.

In that post I wrote about how before Suez was contracted to operate our public works department, town employees used to come around once or twice each summer and trim the weeds along the front of the sidewalk. That hadn’t been done at all this year… until today. 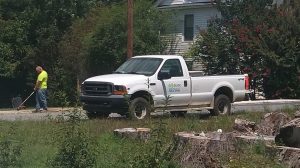 A couple of hours ago I looked out my window and saw a Suez truck –  parked facing the wrong way, on the wrong side of the street, idling the entire time – in front of the vacant lot next door to my house.

A Suez employee was across the street string trimming the sidewalk. Personally, I don’t think that’s the best use of our tax dollars; I’d rather see my neighbors take pride in their town and help keep the sidewalks in front of their homes trimmed on their own, and some do, but over the years citizens have come to  expect this service from the town. 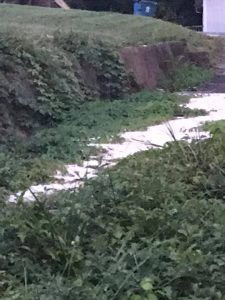 I published the article in which this issue was mentioned ten days ago, on July 19. Today action was taken.

I’m not saying that my post is the only reason this work finally got done. Board of Commissioners candidate J.C.Parrish took a ride around the neighborhood over the weekend and posted pictures of some very overgrown sidewalks on his Facebook page. That likely had some influence on Mr. Cheek’s decision to ask Suez to get this done. There’s a lot of truth to the old saying about squeaky wheels getting greased.

Over the last six months or so there have been several times when issues mentioned in this space or on social media pages have been addressed, either as last minute agenda items or during closing comments at the next Board of Commissioners meeting. In some ways that’s a good thing; it shows that these elected officials are at least paying attention to their critics, but it also betrays the fact that these folks are reactionary as opposed to being proactive leaders of our community. In other words they aren’t really doing their jobs well; they are simply reacting to problems when they are forced to do so. Putting out fires instead of preventing them, so to speak. Is that good government? I don’t think so.

In their defense some might say that the board members simply don’t have the time to address these issues, or that we don’t have the money to fix many of these problems. There’s certainly a kernel of truth to that, but the larger problem has to do with an unwillingness of people like Mr. Shaw and Mr. Cheek to even consider new ideas from some of their peers on the board, or the citizens who elected them; an unwillingness to evolve, to grow and to adapt. We’ve stagnated too long already, and leaders like Shaw, Smith, and Cheek have proven themselves unable or unwilling to think beyond the way things have always been done. It’s time for new ideas and new ways of thinking.

We need a town administrator. Some say we can’t afford one. I say we can’t afford not to. In fact, I learned over the weekend that Mayor Shaw has now come around to my way of thinking, and advocated earmarking funds for an administrator instead of a fire chief during this year’s budget negotiations. The idea failed to gain traction among the voting members of the board, but it was discussed, and that is progress.

That doesn’t mean I’m going to change direction and start advocating for Mr. Shaw’s re-election. We need a fire chief and an administrator. Mr. Shaw’s tenure on the board, as a commissioner and as mayor, reflects more negative decisions and actions than positives over the years; it’s time for Ramseur to elect a new mayor.

I believe that I can do more for our community where I am, doing what I’ve been doing – recording meetings and holding elected officials accountable – than I could as a voting member of the Board of Commissioners, or as your mayor, so this is where I intend to stay, at least for now.

Y’all have a good day.