I spent much of this afternoon compiling and editing videos of the trainwreck of a meeting that was held last night at the Ramseur municipal building, in preparing to write up an article about what has become a debacle surrounding the proposed new roof for our local library. I had intended to start writing that piece this evening, but late this afternoon something happened that made me change gears completely. 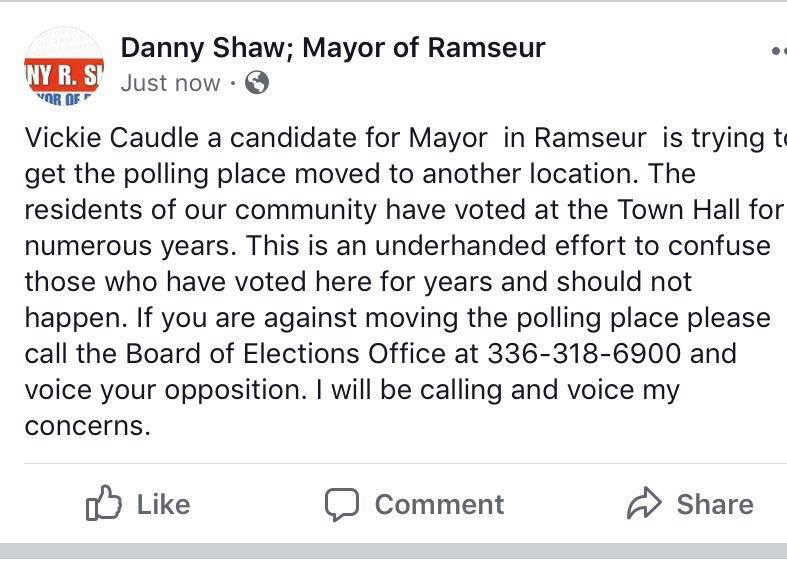 Around 4 p.m. this afternoon, Mayor Danny Shaw posted the message you see above on his official, Mayor of Ramseur Facebook page, openly using his office for political purposes (which is kind of an ethical no-no, but, consider the source). What the mayor failed to state was the fact that at 5 p.m. this afternoon the county Board of Elections was to hold a public meeting that included this issue as part of their scheduled agenda. I knew the meeting was going to occur today, but hadn’t planned to attend until the mayor made his post. I figured he would show up there, and I was right.

Before I left to attend the meeting I shared the mayor’s message with a comment of my own, saying “Perhaps if the mayor didn’t have a history of finding excuses to enter the building, and we didn’t have a sitting commissioner, also running for office this year, who works full time in the same building, this wouldn’t have become an issue. And why is the mayor politicking on his official page? That seems a bit, um, unethical to me.

“If you agree with me and others that our elections should be held in a more neutral setting, call the number the mayor posted [above] and tell the Board of Elections so.”

“As for publicizing the new location, should it be moved, rest assured, I’ll make certain everyone knows where it is.”

Mayor Shaw spoke during the public comment period of the meeting, offering assurances that neither he nor Commissioner Cheek would be inside the building on election day. He made an impassioned plea for keeping the current location, which has been used as a polling place possibly as far back as 1977, claiming that many people would be confused by the change.

I also spoke during the public comment period, pointing out that contrary to the mayor’s stated opinion, Mayor Pro Tem, Vicki Caudle, is not the only person who has been lobbying for this change of venue. I know several of those people personally.

As for the argument made by Mayor Shaw, and at least one member of the Board of Elections, revolving around the confusion caused by changing polling place locations, a discussion held later in the meeting seemed to nullify that argument.

It was stated that in municipal election years, if a hand full of voters living in an outlying precinct are qualified to vote in a nearby municipal election, the board of elections is legally allowed to, and does, transfer those voters to an adjacent precinct where the election is held in order to avoid the cost of opening another precinct for a dozen or so people.

Is that not the same thing as moving someone’s polling place? I would argue that it would be even more likely to cause confusion since the move is only temporary, and reverts back to another place every other year.

During the meeting Melissa Johnson, director of elections for Randolph County stated that she had already looked at several potential sites for a new polling place in Ramseur. One location she mentioned is Jordan Memorial Church, which is, for all practical purposes, located right behind the municipal building.

The other location she favored was the Family Center belonging to First Christian Church. Mrs. Johnson stated that she had toured that facility several years ago when the board was seeking potential early voting sites on the eastern side of the county, and said that it was her favorite. The building is ADA compliant, has plenty of room for polling inside and plenty of parking outside. We’re certainly used to the traffic here on Church Street, as activities go on there several nights per week almost year round, so that’s not an issue either.

Another argument for changing our polling place involves the logistics of set-up and tear-down. Elections are typically held on the first Tuesday of the month. Board of Commissioners meetings in Ramseur are held on first Mondays. Sometimes the board meetings are rescheduled to accommodate poll workers, who have to be on site and have polls open by 6 a.m.

Sadly, the board hasn’t always remembered this conflict, resulting in poll workers, who aren’t paid much to begin with, being forced to wait until after the commissioners finish. That can mean a very late night for those dedicated souls who make our elections possible. Moving the polling place to a new location would eliminate that problem permanently.

My personal preference between the two most favored locations would be the First Christian Church facility simply because, long term, it would make a better site for managing our municipal elections as well as state and national elections that bring in voters from further out in the county. It sits on the opposite side of Sunset Knoll cemetery, across Coleridge Road from the fire station. Hopefully those with the power to do so will offer both of the locations described above for the Board of Elections to use.

The next meeting will be held at 5 p.m., Tuesday, August 20 at the Board of elections office, located at 158 Worth Street in Asheboro. I encourage all citizens, no matter which side of this issue you prefer to attend. Those who cannot are encouraged to call 336-318-6900 or email Melissa Johns at melissa.johnson@randolphcountync.gov prior to that date and time. This is our election for our town. Please make your opinion known.