At Least One Of These People Is Lying

At the August 5 regular meeting of the Ramseur Board of Commissioners, Adam Smith presented proposals from three companies to replace the roof at the our public library. The board voted to accept a proposal from a Charlotte-based company called Give-N-Go Construction, LLC, but many questions remained unanswered.

A little digging at the North Carolina Secretary of State’s website reveals that one of the managing partners of Give N’ Go Construction Group, LLC, is a non-profit called Give n’ Go, Inc., based in Rock Hill, South Carolina. Here’s a link to their website. The video below shows the discussion at the August 5 meeting.

A few days after the August 5 meeting a contract was received from Give N’ Go Construction,demanding fifty percent of the invoice price be paid prior to commencement of work. In the business world a request like that indicates that a company is under capitalized; they do not have the financial resources to purchase materials for a project. That’s a warning that you might not be dealing with a reputable company. 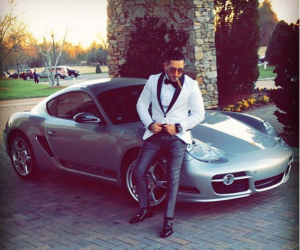 On August 8 an invoice was emailed to the town clerk from a company called Unified Staffing, a temporary employment agency. That rightly brought the entire process to a full stop.

You can review the Give N’ Go proposal that was initially accepted by the Board of Commissioners here. This link contains the contract, and this link will show you the invoice. An image of the email from the staffing agency is shown below. Click on the image to enlarge it. 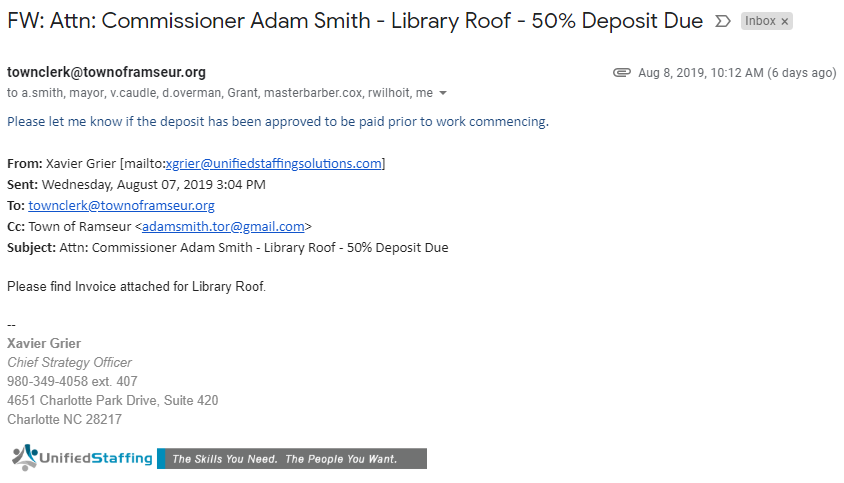 Who are these people? There are reputable contractors who specialize in this type of work in Siler City and Asheboro, or even Greensboro. Why Charlotte?

Remember last year when Mr. Smith was appointed to the board he immediately hired someone from the Charlotte area, where he used to live, to install and repair lighting fixtures in our cemetery, most of which no longer function. Is this another one of those deals? It certainly looks as though it could be, despite Mr. Smith’s assurances that he has no connections to Give N’ Go Construction.

While all of the above was playing out, a responsible bid from a reputable local company, Thompson Roofing Services, was found in the municipal office. A special meeting of the Board of Commissioners was called for Monday, August 12 to address concerns about Give-N-Go and consider the Thompson proposals, which were apparently delivered to Commissioner Cheek almost two months before the board voted to seek bids for the library roof.

To quote one local citizen who attended the special meeting, it was rife with “negativity, finger pointing and excuses.” I can’t come up with a better, more concise description of what those of us who in attended witnessed that night. See the whole thing for yourself in the video below.

Mayor Shaw opened the meeting and stated that its purpose was to discuss the roof on the library. He then pointed out that another proposal, from a local company, Thompson Roofing Services had been discovered in the office after the contract had been awarded to Give N’ Go on August 5. 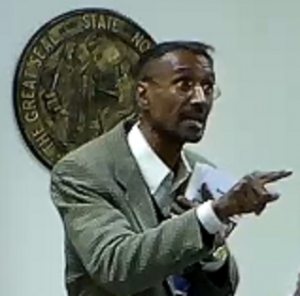 Commissioner Caudle asked whether any board member had shared bid information with any other bidders. That activity is called bid rigging, and it is highly unethical, not to mention illegal.

Grant Cheek responded, saying, “No. We had a leak at the library several months ago, and Bobbie [Hatley] told Thompson to go ahead and give them a bid while she was still working (inaudible)… We’ve had that bid probably… a couple months.”

Mayor Shaw stated that the date on the proposal reads May 14, 2019. At the same time Commissioner Smith stated that he’s “never seen this bid.”

At that point several commissioners began talking at once and Commissioner Cheek stated that at the last board meeting Jill Wood asked Adam Smith if had seen the “other bid”. Commissioner Caudle then asked for clarification from Mr. Cheek about where Mr. Smith would have seen the proposal.

The bid from Thompson Roofing was clearly addressed to Commissioner Cheek. Commissioner Caudle asked Mr. Cheek if it had been emailed to him, and Mr. Cheek responded, “No. They came here and talked, and brought the materials [samples] here when they, um, during work hours.”

Mrs. Caudle then asked, “Why did they send it to you, ‘Attention Grant Cheek’, not Adam Smith?” Grant Cheek responded that “you’d have to ask them,” and claimed that former clerk, Bobbie Hatley, asked them to submit a bid, because the town had employed Thompson in the past for leak repairs. 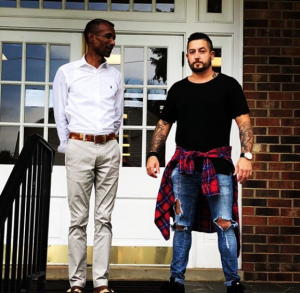 Commissioner Overman then entered the conversation, asking why this proposal was not presented at the previous meeting when board members specifically asked if any other bids had been submitted. Grant Cheek responded that he knew the proposal was on the clerk’s desk, and stated that Mr. Smith had been in the room one day while it was there. He further stated that he thought that “she” had talked to Smith about the bid, but could not verify this.

When Commissioner Caudle asked for clarification of who Mr. Cheek meant by “she”, Commissioner Cheek snapped back, “Bobbie!” and after a long pause he said, “And this was the bid Jill [Wood] was asking about at the last meeting.”

Commissioner Overman responded, “Well, if JIll knew (inaudible) about this, how come it wasn’t brought to our attention at the last meeting?”

At this point Grant Cheek asked Jill Wood to tell the board what she asked during the discussion on August 5. Mrs. Wood approached the podium and stated, “I asked, at the last board meeting, because I had run across this bid on the desk in the clerk’s office, and so I asked Grant Cheek to text Adam Smith and let him know I would be putting it in his [mail]box… So it was over there (in the commissioners’ office) for probably a week or two weeks.”

The video below is a fourteen second clip pulled from the August 5 meeting. Jill Wood, off camera, can clearly be heard asking Smith if he received the Thompson bid, and he responded, “Yeah, I got it.”

Commissioner Caudle then asked, “Grant, did you text him?” to which Mr. Cheek meekly responded, “Yes.” Adam Smith interjected, saying, “I never got anything.”

If you haven’t done so yet, please watch the whole video. I don’t have the stomach to sit through it a fifth time. The meeting lasts a little over twenty minutes, and the sound quality of the video is better than it has been in the past. Most board members and Mr. Wilhoit seem to be making an effort to use their microphones now. You really need to see and hear these grown men behaving like children with your own eyes and ears to get the full impact.

Grant Cheek said he sent a text message to Adam Smith regarding the Thompson proposal. Smith denies ever receiving any such message. One of these men is lying, and given their track records, it’s difficult to guess which one it is in this case.

On July 14, before Bobbie Hatley’s last day as our clerk, I sent a request to the her email account and asked that it be forwarded to all parties affected upon receipt. In that message I made a legal public records request for all electronic and printed (paper, as in mailed or hand delivered documents) pertaining to all public business of the town of Ramseur. That request specifically included all text messages. I have received a few such messages from Mr. Cox, Mr. Overman, and Mrs. Caudle, but not once have I received anything from Mr. Cheek or Mr. Smith. Click the image below to read the email I sent for yourself. 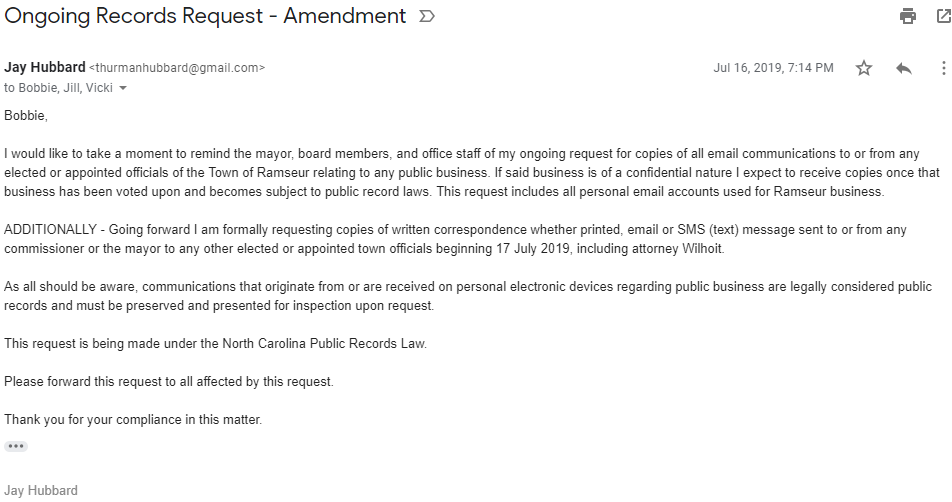 Commissioner Cheek says he doesn’t use email, but that has been proven false. As for Mr. Smith, I am in possession of numerous emails pertaining to town business, sent by him from several accounts over several months. Therefore, his statements hold about as much water as Mr. Cheek’s claim not to have been involved in the obtaining the bid from Thompson. Neither of these men have any credibility.

Why would representatives from Thompson Roofing Services have shown up with roofing material samples while in town to perform a small leak repair if they had not been asked to give a quote on the full roof replacement? Why would the bid have been sent to Mr. Cheek’s attention if he had not solicited it?

I have attended every regular board meeting since January of this year, and I do not recall any discussion of a leak repair or payment for such work being approved. Such a job might have fallen under the $1,000 threshold, and thus not required action from the board, but I suspect the Thompson bid was requested by Grant Cheek and delivered to the office along with material samples for the board to consider. Please download and review Thompson’s bids and documents here, here, here, and here, and then draw your own conclusions. 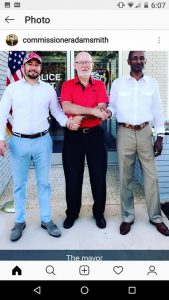 During the August 12 meeting Adam Smith stated that he didn’t know he had a mailbox in the commissioners’ office. If true, it appears that Mr. Cheek, his next door neighbor, and Mayor Shaw, who cast the tie-breaking vote to appoint Mr. Smith to the board, and who has been a board member since 1995, simply turned that young man loose on our little town without bothering to provide even the basic orientation any new employee anywhere should receive; such as where his shared office space is located or where he should look to find important information to prepare himself for meetings.

Then again, Shaw and Cheek were looking for nothing more than a team player to rubber stamp their agendas when that appointment was made, so why would either of them bother with telling Adam Smith how to go about doing his job?

The meeting will reconvene at 7:15 p.m. on Thursday, 15 August 2019, to continue deliberations regarding the library roof contract, as well as to discuss the “trademark issue” and the search for a fire chief and a new town clerk. I hope to see many of you there.