Ramseur Deserves Better Than This

A few weeks ago I expressed concerns about who has access to our municipal office now that Bobbie Hatley, our former town clerk, is no longer there to hold things together. In my article, Time For The Good Old Boys Club To End, published July 25, I wrote: 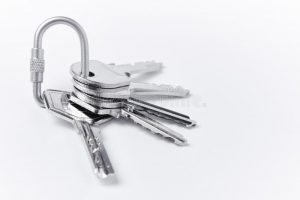 Some may find my concerns over who has access to the clerk’s office, her computer, and all the administrative and legal records stored in the secure areas of the office a little paranoid, but beyond my personal experiences with a few of these folks last summer and on the campaign trail four years ago, I have other valid reasons for concern.

For example, a few weeks ago, on July 11, the North Carolina Department of Labor conducted an Occupational Safety and Health Administration (OSHA)  inspection in Ramseur. As part of the inspection, records from 2015-2018 were requested, including all records of reportable on the job injuries resulting in employee days away from work. Some of the records required could not be located. Anyone who regularly deals with legal records of any kind knows that such documents must be preserved for a period of time, typically five to seven years, so where are the missing records?

Clerk Hatley left her position with the Town of Ramseur while this inspection was in process, so Mayor Shaw was designated as the primary contact for the Department of Labor to finish their work. I have obtained several emails received by the mayor from Mr. James Dempsey with N.C. Dept. of Labor regarding the missing documents.

Last week, Mr. Dempsey sent another email to Mayor Shaw, and whoever is currently filling the role of town clerk, inquiring about a package sent to the Town of Ramseur on August 6, via certified mail, that appears not to have been received. 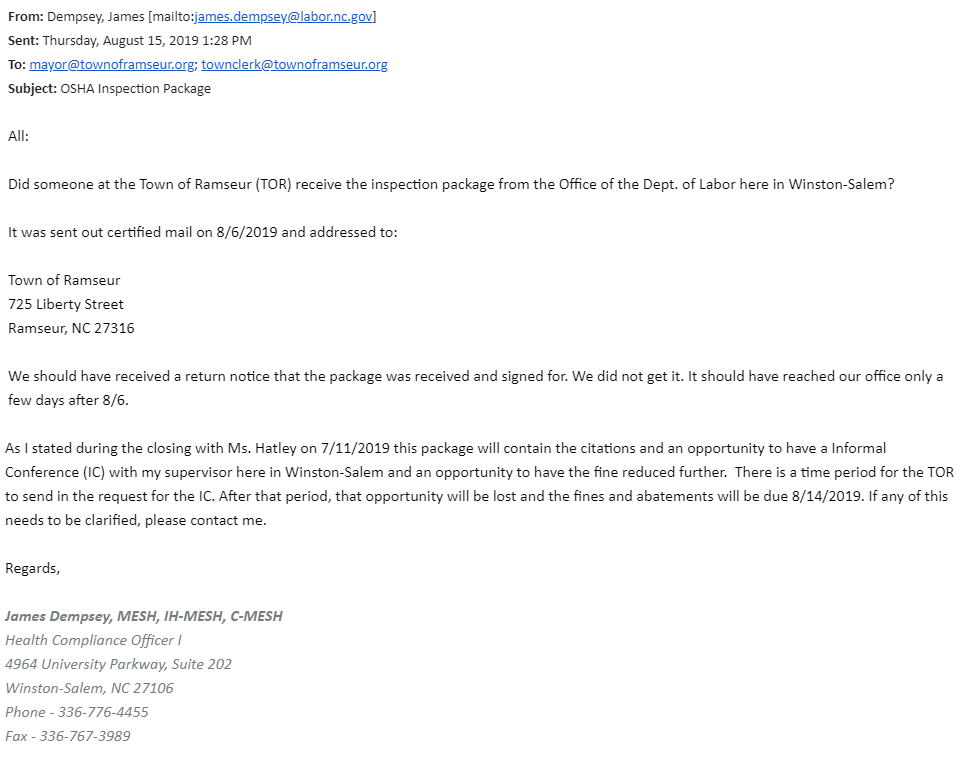 The email mentions citations and an “opportunity to have the fine further reduced”. I will be formally requesting copies of all documents pertaining to this inspection, citations, fines, and correspondence in writing later today. There have obviously been some serious failures in the administration of our town that have resulted in fines that we, the taxpaying citizens of Ramseur, will ultimately end up paying.

In a follow up email Mr. Dempsey sent the following day, August 16, his office offered more time for the town to respond, beyond the formal deadlines mentioned in the email above, due to the ongoing mystery of what happened to the original inspection package. 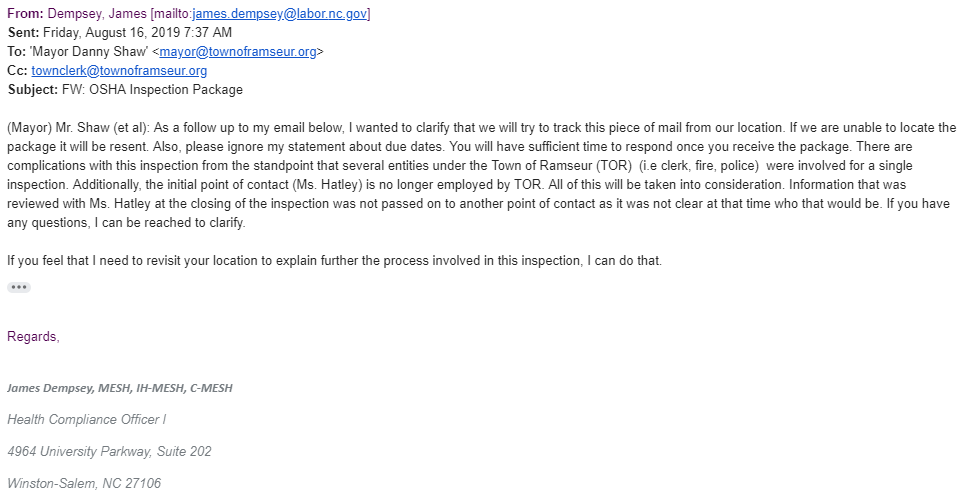 Who knows what became of that inspection package. It’s conceivable that it was simply lost in transit from Winston-Salem to here, but not likely. I would assume that our local post office, as a federal entity, is not prone to the kind of bumbling incompetence we’ve seen from our local government in recent years, so it truly is a mystery.

The bigger issue, administrative incompetence, remains and should deeply concern us all.

Our local government has been issued citations and a fine for failing to do some very basic, mandatory record keeping. Perhaps if our governing board hadn’t been asking our former clerk to fill so many other roles, while paying her as little as possible for her efforts, we wouldn’t be asking a state department go easy on us with fines we obviously earned. This is what you get when you try to run a town on the cheap. Government does not exist to turn a profit, and should not ever be run like a business. Government exists to provide citizens with services most of us cannot afford to buy individually.

Ramseur is suffering from years, if not decades, of mismanagement and incompetence, and this is just one more symptom. The Town of Ramseur cannot grow and prosper without hiring competent outside professionals to administer our affairs. The Board of Commissioners took what appears to have been a step in the right direction last week when they agreed to hire Pam Wortham of Garner as our interim finance officer.

The next step toward bringing our municipal office into the twenty-first century should be to hire a competent person to fill the role of town clerk, and let’s not forget that Mrs. Wortham’s appointment is only intended to be temporary. The search for a permanent finance officer should continue moving forward.

Once we have two competent people filling those roles it is the opinion of this citizen that the “water billing clerk” position, currently held by Commissioner Grant Cheek, should be eliminated. Finding a professional town administrator and/or changing our form of government from the archaic mayor-council form to the modern council-manager form should be a primary objective of the next Board of Commissioners.