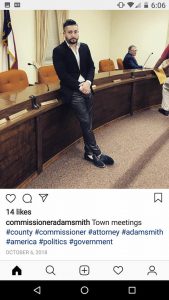 On Friday I reported late breaking details about Adam Smith’s attempt to award a roofing contract to Give N Go Construction without a proper vote in a public meeting. Upon receiving a series of emails spanning Sunday to Tuesday, September 15 -17, I contacted two commissioners, Caudle and Overman, to ask what they new about the situation. Caudle was genuinely shocked, and both stated that they were as clueless about this development as I had been.

Bear in mind that I have an ongoing, legally binding request for all emails regarding public town business that has been in place since last January. In that time I have seen a few emails from Commissioners Cox and Overman, and received numerous emails from Commissioner Caudle, and more than a few from Mayor Shaw. Most of the information published on this website comes from those two sources and emails forwarded from the town clerk email account, currently monitored by Jill Wood a few times each week.

On Saturday, September 22, Ramseur citizen, Kay Overman, sent an email to all our town commissioners expressing her concerns about Smith’s apparent rogue behavior on this issue. As far as I know, the only response she received was from Adam Smith, reproduced below. 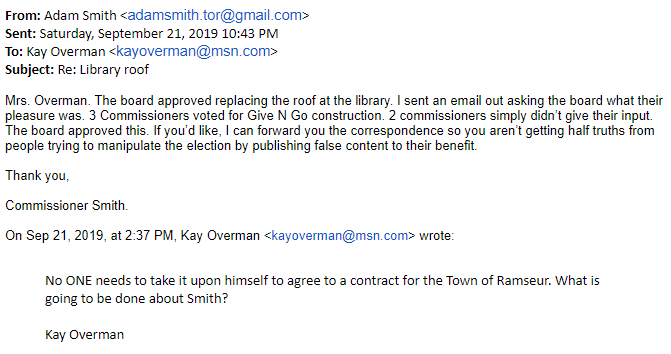 In my earlier post, Who Approved This Contract?, I wrote, “When I saw those emails I called Commissioner Caudle and asked her what she knew. Her response was shock. She was obviously as in the dark as I was about this business. She offered to call Commissioner Cheek and ask him what he knew.

“When she called me back a few minutes later she said that Grant Cheek claimed to know nothing about this and that he told her that he would send out an email stating that the board had not voted to approve Smith’s action. I asked Mrs. Caudle to forward that email to me as soon as see got it, but so far it has not arrived.”

Today I can tell you that Grant Cheek flat out lied to Commissioner Caudle about that, and also has been lying to me for months in claiming that he does not use email. The email below was sent by Mr. Cheek ot Adam Smith last Sunday afternoon. 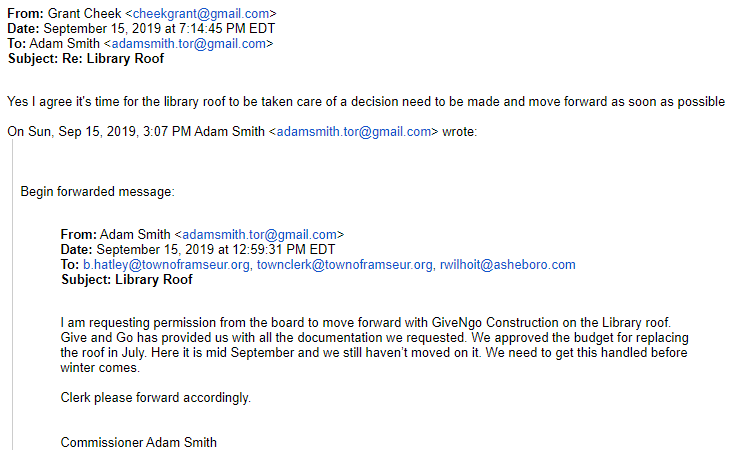 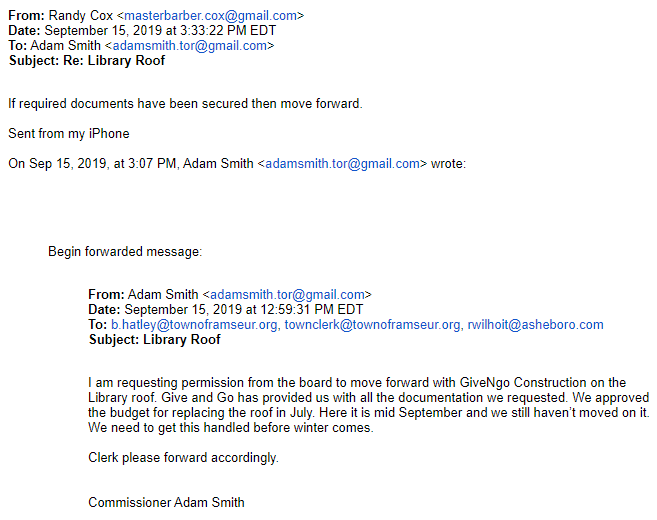 To my knowledge, as of this writing, Commissioners Overman and Caudle still haven’t received that message, a full week later, but that didn’t matter, since Adam has learned from those who brought him to this dance, that all he needs is the agreement of two other commissioners to move forward with anything he wants to do.

Notice also that the responses Smith received from Commissioners Cheek and Cox were to a forwarded message, sent to them almost three hours after the first message was sent to the clerk’s and the attorney’s accounts. Smith appears not to have emailed any other commissioners that day. He only brought the mayor into the loop the following day when he emailed Give N Go and awarded the contract to them.

Mayor Shaw contends that he was not aware of this activity until late Friday afternoon when the rest of us learned about it. If our mayor isn’t checking his email every day then perhaps it’s time to choose a new mayor who better understands modern communication technologies. The email Smith sent to Given N Go is reproduced below. 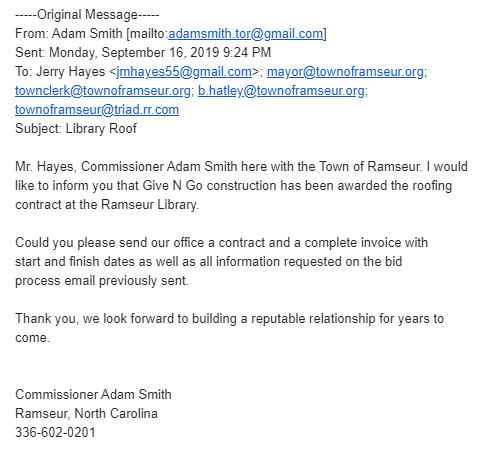 It’s one thing to email or call commissioners individually to gauge support for an issue that the board needs to address in the future, but it’s another thing entirely to use that method to award a $40,000 contract that has already been a volatile and contentious issue among both board members and citizens for months. That’s not acceptable at all, but it’s the way Adam Smith rolls.

The library roof needs to be replaced, no question, and I agree that it needs to be done soon. Perhaps Adam Smith should have shown up at the regular board meeting earlier this month, when Mayor Shaw reported that he was out of state, if this issue matters so much to him. I spoke with someone yesterday who sees him regularly at his place of employment.

On the day of the meeting he missed, Adam Smith was seen at work in Asheboro around 11 a.m. If he was out of state by the time the meeting convened at 7:30 that night he must have driven straight from work to the state line.

The story doesn’t add up, but missing a few scheduled meeting is nothing compared to the pattern of unethical rogue behavior Smith has exhibited in the thirteen months since his appointment by Cox, Cheek, and Shaw to our Board of Commissioners. Click here and here if you aren’t familiar with the earlier incidents.

What is Smith really trying to do here? Why is he so hot to award this contract to this company, despite having received a lower responsible bid in the initial group two months ago, from Thompson Roofing, a local company? Why weren’t bids solicited from other commercial roofers in Randolph or Guilford or Chatham counties? Why this obscure company from Charlotte that doesn’t appear to specialize in commercial roofing?

I have my own theory about what’s going on here, but I cannot as yet prove it and I’m not in the business of speculating. Contrary to Smiths assertion, in his email to Kay Overman above, that I’m publishing false content and half-truths, everything you see here is quite real and verifiable. And it all points to some very unethical behavior or worse on the part of Adam Smith. Does he really believe we are all just a bunch of gullible hicks; that we aren’t smart enough to see through his deception? If so, Adam Smith might be clever, but he’s not very smart.

Please join me in demanding that this contract be withheld, and Adam Smith be censured if not removed from our Board of Commissioners before he costs us far more than he already has. I call upon Mayor Shaw and the other members of the Board of Commissioners to publicly denounce Adam Smith’s unethical behavior before sundown tomorrow, 23 September 2019.

I will be sending an email to Attorney General Josh Stein’s office soon after publication of this piece. I hope you will all join me in demanding a full investigation into Smith and the people who continue to support him in our local government. The toll free number to AG Stein’s office is 1-877-566-7226, or use the contact form you’ll find at this link.

Together we can remove this problem and the people who appointed him from our local government.