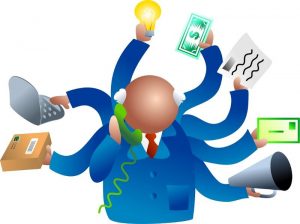 It wouldn’t matter if we paid an administrator a salary of $100,000 or $1,000,000; if you ask more than is humanly possible from a person no amount of money will make the arrangement work. Asking one person to fill too many roles in an operation as complex as a town – even one as small as Ramseur – is a recipe for failure. Our Board of Commissioners should be working to fill two positions: town clerk and town administrator.

In those two individuals, the board should be looking for a combination of experience and education that would allow a clerk and administrator, working as a team, to handle all of the administrative duties listed above and others that may arise in the course of doing the town’s business, including billing and collecting payments for our water and sewer utilities. If additional help turns out to be necessary, that need could be filled by part-time student interns or retirees employed a few hours each week to answer telephones and accept payments at the front desk. It’s not rocket science folks.

Hiring two people to fill the necessary administrative roles in our office, regardless of how the duties are divided between them, would help ensure that if one resigned or became incapacitated there would almost always be at least one person in the office familiar with the day to day functions that keep our town running smoothly. The chaos we’ve seen since clerk Hatley’s departure provides all the proof anyone should need to see the value of having both an administrator and a clerk on our payroll.

After reading through the materials available online, and in the textbook I purchased from UNC SoG, I was curious about what other states have to say on the subject. Obviously, every state is different, but at a base level all local governments exist for one purpose: to provide citizens with services that are cheaper in bulk; things we all want or need such as police and fire protection, sanitation, water, and sewer treatment or recreational opportunities

A city attorney’s role and the cost is also minimized with a competent town administrator. Small towns that say they can’t afford an administrator often pay an attorney well over one hundred dollars per hour to address administrative issues that could easily be handled by a professional administrator paid considerably less.

Finally, city administrators provide for more effective use of state and federal grants in providing and paying for city services. A full-time administrator who has the time and latitude to interact with other agencies is more likely to be knowledgeable about the availability of federal and state grants.

I encourage everyone, especially current and aspiring board members, to read the full study, found here, and another document, from the Illinois City/County Management Association, that makes an excellent case for professional town administration as well. This seems like a no-brainer.

Ramseur needs both a full-time clerk and a qualified administrator to lead our local government, and a board smart enough to get out of the way and let those people do their jobs. Having a competent professional staff handling the day-to-day operations of our town will provide a level of stability that our current system of schoolyard popularity contests and musical chairs, with players changing every other year, simply cannot.