Wrong By Any Standard

Let me begin this piece  with a little disclaimer. I had  not planned to publish anything in this space until after the election next Tuesday, but the information I’m about to share with you is too important to ignore.  I did not go looking for this story; it came to me. Unsolicited.

On Sunday, October 27, a friend called to tell me that I should expect a telephone call from someone I’ve never met, regarding an incident several months ago at the Ramseur Food Pantry. A few hours later my phone rang and when I answered the woman on the other end asked to speak with me.

After introducing ourselves the caller proceeded to tell me about an event she witnessed that shocked me. The lady asked me not to publish her name because, like so many people I’ve met since moving to Ramseur, she feared that putting her name on this would result in retaliation from some members of our community, so I’ll call her G. 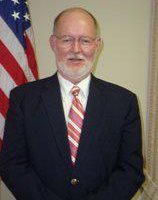 According to G, one day several months ago after completing an inventory at the food pantry, she and her co-worker were in  a rear hallway getting their coats when the back door connecting the food pantry to the Ramseur municipal office opened and Mayor Danny Shaw stepped inside.

The lights were off so Mayor Shaw didn’t notice the two people standing in the room when he picked up a bag of cereal. At that point G cleared her throat and surprised the mayor. He told G that he liked that kind of cereal and she informed that he was welcome to come back on Friday to apply for assistance. Then she took the bag from his hands and placed it back on the shelf.

The food pantry was closed on the day in question. The volunteers were only there to inventory the food on hand. Mayor Shaw knows when the food pantry is open. He did not expect anyone to be there that day. According to G his reaction upon finding two women standing there was one of shock and surprise. Simply put, Danny Shaw thought no one was there and he intended to take that bag of cereal for himself. There is simply no other reasonable explanation for his actions that day.

G also told me about other times when donated food has gone missing and inventories have come up short, as well as times when the door between the back of the food pantry and the municipal office was found propped open. It would seem that the day Danny Shaw was caught trying to make off with a bag of cereal was not the first time town employees and/or elected officials have entered the food pantry and helped themselves.

G told me that the back door to the food pantry had been found propped open, against their rules, numerous times, and that on two occasions she has reported missing food to the board of directors at their meetings, but each time the board decided to take no action. One board member’s reaction was one of indifference, “Maybe they were hungry.” I hate to be the one to break it to these folks but that’s not how it works.

I’m told by reliable sources that the Ramseur Food Pantry is a 501c3 non-profit corporation operated by several churches in our community. Its Facebook page states that the organization “[p]rovides emergency food for people who reside in southeastern Randolph County, NC.” The organization was established to serve the least among us, not to be a snack bar or free lunch buffet for public officials or others with access to the back office. Allowing people to simply take food without qualification or accountability could endanger their non-profit status.

Poverty is a big problem in the Ramseur community. U.S. Census Bureau statistics from 2017 indicate that 30% of the population here lives below the federal poverty level, and we all know that those figures are lower than the actual numbers. Every bit of food donated to the Ramseur Food Pantry is vitally important to an impoverished family somewhere in our community. 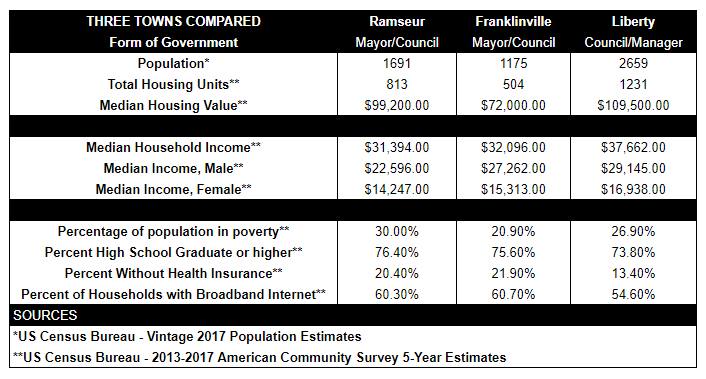 On the afternoon of October 29, G called again and asked me what I had done; her phone had been ringing off the hook. She was getting calls from friends, neighbors and members of her church asking about this incident.

At that time I had not even begun writing this report, but I had spoken with someone I know who has given many hours of their time volunteering at the food pantry over the years. I contacted that person because I hoped to corroborate G’s statements about missing food and inaccurate inventories. In the course of that conversation I did slip and state G’s last name and the name of her church. I have apologized to G for that.

G told me that some of the people calling her implied that this is being done for “political purposes” to “throw the election” and that they feared retaliation against themselves or their church. The only political purpose at work here is – and has been from the beginning – an effort to expose corruption and bring transparency to our local government. If exposing what appears to be a pattern of ongoing petty theft from a local faith-based charity results in retaliation against a church or one of its member volunteers this community has bigger problems than anyone might have imagined.

As for throwing the election; if exposing this incident causes Danny Shaw to lose the election I think that’s the very least he deserves. He is the civic face of our town and he was caught red handed trying to take something that was not his to take. Get caught doing that at the local Family Dollar or the Just Save  store and you’ll find yourself spending some time down at the county jail.

G is a respected member of our community who has lived here for more than half a century. She sat on this information for months, until her conscience would no longer allow her to remain silent. She should be applauded for having the courage to step forward and for trying to make us all aware of what she saw. If she gets any grief from her neighbors or her church for doing so, that’s a failure on the part of those people.

What kind of a person, much less a Christian, steals food intended to help hungry children and struggling families? What kind of minister would rather cover up or ignore such deplorable behavior than help expose and correct it? I no longer attend church anywhere because I refuse to silently accept such rotten behavior from people who are supposed to know better. The Jesus I learned about when I was growing up would not approve.

I believe G. I have no reason to suspect that she is being anything other than honest. I also believe that it is the patriotic duty of every American to hold our government and the people we elect accountable for their actions.

Danny Shaw got caught trying to steal a bag of cereal purchased with funds donated to feed hungry people in our community. There is simply no other explanation for why he was in that room, when he thought no one would be there, with a bag of cereal in his hand.

If Mayor Danny Shaw would take food from the poor because he’s too cheap or too lazy to buy his own, what else might he take that isn’t his? Who else in that office has been skimming food? How long has this been going on? And why isn’t there a lock on the back door of the food pantry to prevent this from happening?

P.S. Please continue supporting the Ramseur Food Pantry with your time and resources. Many families and individuals depend on the support they receive from that organization. If anything, I hope you will consider donating more of both your time and your money to this cause so that they can find better solutions and resolve the issues exxposed above. It’s the right thing to do.