For those who haven’t been following along, our local government unit parted ways a few months ago with State Code Enforcement, the contractor that had been managing these issues for us, electing instead to take that responsibility back in-house. Code enforcement isn’t as simple as sending someone out to measure grass height, counting cars in a parking lot, or running food trucks off of properties where they were invited to set up. In fact, there are certain qualifications and certifications needed to do perform some aspects of the job.

That decision was made before the new fiscal budget was finished, and before most of the board members realized that there wasn’t enough money available to do many of the things they wanted to accomplish, such as giving raises to town employees. Now code enforcement falls in the laps of the board members who are already working without pay. This is just one example of why doing away with the pre-agenda meetings will only lead to more problems.

Last night a local citizen, Ms. Alexander, addressed the board regarding a picket fence she’d like to install in her front yard. In fact, two of her other neighbors also want to put up matching fences. When completed these structures will greatly enhance the curb appeal of all those properties as well as those around them, but there’s a problem. Apparently both our current and proposed zoning ordinances state that fences must be set back fifteen feet from the street, or so it was stated last night.

After a brief discussion, which you can see early in the video above, the board voted to set up a public hearing in order to amend the text of the ordinance, but no one is sure what the amended text will look like since it has to come from the planning and zoning board. The planning board will forward their recommendation to the board of commissioners, then acting as a board of adjustment, and finally, if approved, the proposed fence can move forward as planned.

The fence is already under construction, the posts have been installed. Why wouldn’t it be? We live in a municipality that is so rural that every residential property in our town potentially qualifies for US Department of Agriculture financing. Why would any property owner or contractor suspect Ramseur would have such draconian rules on the books?

At one point in the discussion an attempt was made to justify the fifteen foot setback due to the fact that fences built too close to state roads can present safety issues for motorists and pedestrians. Fences too close to a street can also impede maintenance and repair to utility infrastructure. Both are valid concerns that should be considered. No one on the board last night thought to suggest that perhaps the wording in the ordinance could specify a difference between state roads, such as Brooklyn Avenue or Coleridge Road, and residential streets like Church or Lineberry Street.

Ms. Alexander, the resident seeking permission to build the fence, did state her willingness to sign a waiver absolving the town of responsibility for damage caused by any future utility work. It is unfortunate that we live in a society that has become so complex that the average citizen can’t put up a fence on her own property without fear of running afoul of the zoning police. Zoning today is so complicated that a group of citizens in a small town requires expert guidance not only to adopt or amend ordinances, but even to make a few basic decisions or grant a variance to the rules. The only people benefiting from this level of complexity are litigators and consultants. 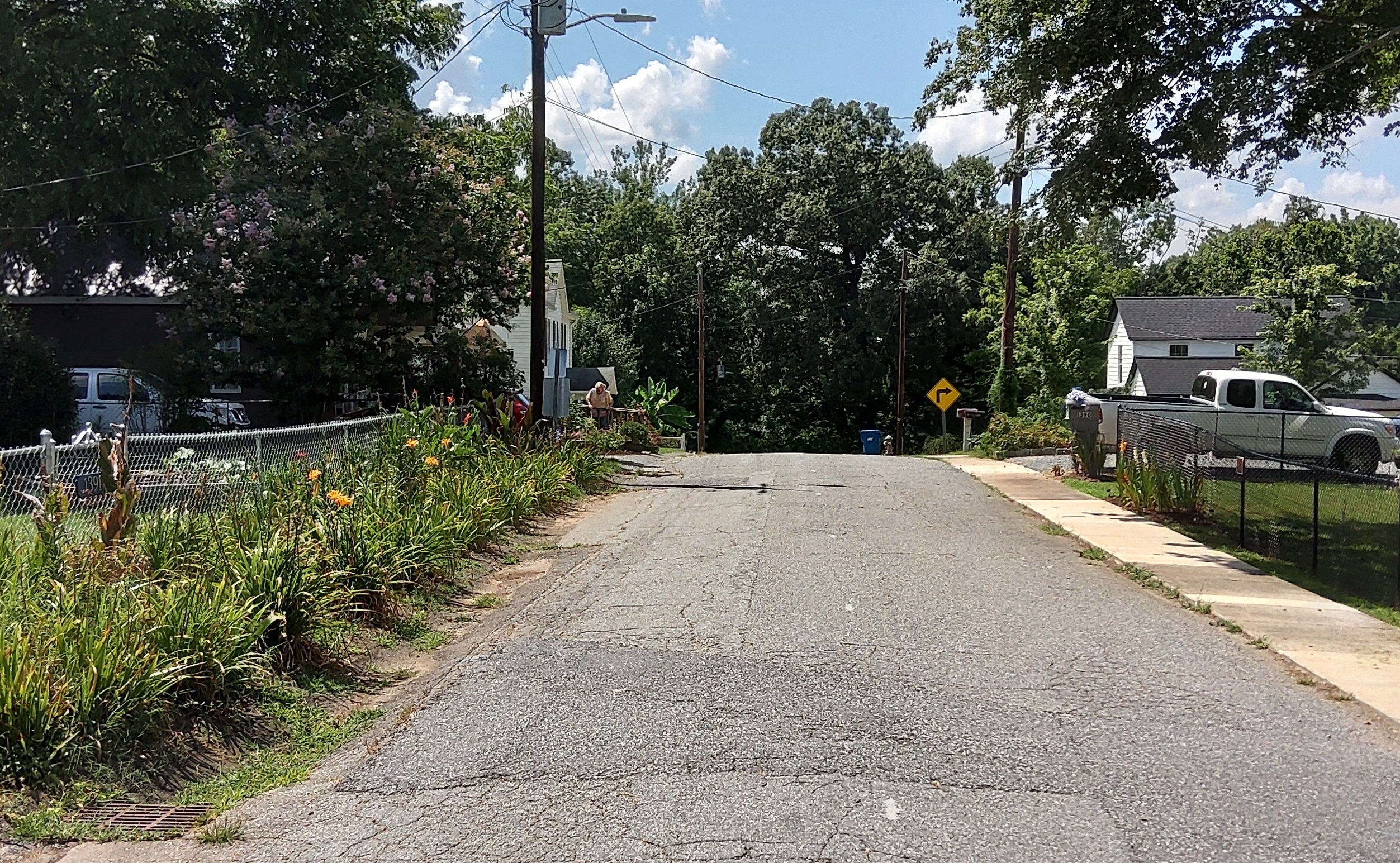 The black chain link fence was in the photo above was installed last year, fifteen feet back from the center of the street.

Fifteen feet from the center line of a road makes a huge difference compared to a fifteen feet set back from the edge of the street. Fifteen feet from the center of the road put my neighbor’s fence about two feet behind the sidewalk, the same place Ms. Alexander wants to locate her fence, but instead of a quick discussion ending with the words, “Your fence will be fine in the proposed location,” and an apology for the misunderstanding, the answer delivered was more along the lines of wait six to eight weeks and we’ll get back to you.

We’re nearing the end of the long process of rewriting and adopting an updated set of ordinances, and that adds to the uncertainty in situations like this, but the rule in question last night – the fifteen foot set back –  was not set to be changed in the new rules. It just keeps getting reinterpreted dependent upon who is asking and the reading skills of the parties involved.

Welcome to Ramseur Ms. Alexander. I’m sorry you’re having to deal with this particular mess. I hope the board will do the right thing and let that new fence be installed as requested. It’s the right thing to do.