I’m a democrat, lowercase ‘d’, because I believe in democracy, especially the kind the framers of our constitution created. I believe they left us a blueprint for creating a more perfect union. They had no intention of that document remaining stagnant and dead for all eternity. Had that been the case there would have been no provision made for amending our constitution.

Sadly, over the last century, and especially the past fifty years, our democracy was hijacked by people who do not believe in democracy, the will of the people, or the consent of the governed. Historian Heather Cox Richardson laid out this history concisely in her February 17, Letter from an American:

“In 1971, Lewis Powell, an attorney for the tobacco industry, wrote a confidential memo for the U.S. Chamber of Commerce outlining how business interests could overturn the New Deal and retake control of America. Powell focused on putting like-minded scholars and speakers on college campuses, rewriting textbooks, stacking the courts, and pressuring politicians. He also called for “reaching the public generally” through television, newspapers, and radio. “[E]very available means should be employed to challenge and refute unfair attacks,” he wrote, “as well as to present the affirmative case through this media.” 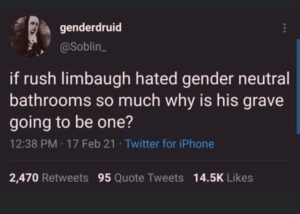 Pressing the Movement Conservative case faced headwinds, however, since the Federal Communications Commission (FCC) enforced a policy that, in the interests of serving the community, required any outlet that held a federal broadcast license to present issues honestly, equitably, and with balance. This “Fairness Doctrine” meant that Movement Conservatives had trouble gaining traction, since voters rejected their ideas when they were stacked up against the ideas of Democrats and traditional Republicans, who agreed that the government had a role to play in the economy (even though they squabbled about the extent of that role).

In 1985, under a chair appointed by President Ronald Reagan, the FCC stated that the Fairness Doctrine hurt the public interest. Two years later, under another Reagan-appointed chair, the FCC abolished the rule.

With the Fairness Doctrine gone, Rush Limbaugh stepped into the role of promoting the Movement Conservative narrative. He gave it the concrete examples, color, and passion it needed to jump from think tanks and businessmen to ordinary voters who could help make it the driving force behind national policy. While politicians talked with veiled language about “welfare queens” and same-sex bathrooms, and “makers” and “takers,” Limbaugh played “Barack the Magic Negro,” talked of “femiNazis,” and said “Liberals” were “socialists,” redistributing tax dollars from hardworking white men to the undeserving.”

Rush Limbaugh did more to divide this nation and undermine our democracy than any other public figure I can recall. May his grave become a gender-neutral restroom for many years to come.

You see, Limbaugh and those who emulated him were instrumental in what Loretta J. Ross describes as the Nazification of the Republican Party in her recent article of the same name at Counterpunch.

“Global contempt for the word “Nazi” is a lesson for us today in the United States after the attempted criminal coup at the U.S. Capitol on January 6, 2021. Anyone identified as sympathetic, supportive, or financing these seditious acts that attempted to deny the peaceful transfer of power in our country should be treated with the same public condemnation that the Nazis received after World War II. This includes Nazified people in Congress, in the media, in universities, in regular jobs, and throughout society because fascism is not the fevered dream of one delusional man.
… 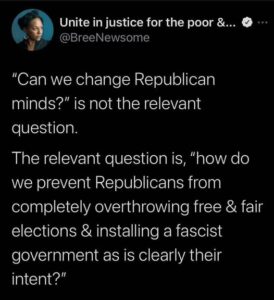 “The Republican brand as a legitimate political party will be forever associated with far-right ideologies, including neo-Nazis and neo-Confederates. These so-called “respectable” leaders coddled and stoked a white supremacist insurrection by Trump for the past four years. Their transactional opportunism enabled Confederate flags to be defiantly paraded in the U.S. Capitol, a shame not even achieved during the Civil War. They proved they don’t want to share a pluralistic democracy with other political parties and interests.

“If Republicans can’t permanently dominate this country with a demographically shrinking number of angry white people, they proved they are ready to blow it up, figuratively and literally.”

There is a path forward, but it will require us all, or at least a great majority of us, to embrace democracy. An excellent first step would be the passage of the For the People Act.

“[T]he For the People Act is plausibly the most important legislation considered by Congress in decades… The bill’s provisions largely fall into three categories: First, it makes it far easier to vote, both by eliminating barriers and enhancing basic outreach to citizens. Second, it makes everyone’s vote count more equally, especially by reducing gerrymandering. Third, it hugely amplifies the power of small political donors, allowing them to match and possibly swamp the power of big money.”

Sadly, so-called conservative Republicans will stand in the way of this or any other reform meant to make our elections more representative of the majority of Americans. They know that their ideas are unpopular, that they cannot win free and fair elections, so they are willing to embrace any dictator that pays lip service to their outdated ideals, based on white supremacy and male dominance. They are literally driving our democracy over a cliff because a small group of rich old white men is terrified that they might be treated the way they have treated women, gays, Black people, and other ethnic minorities throughout our history.

I hope you’ll click through the links and read all of the above-linked articles, but you probably won’t.