Several years ago my neighbor and I were on his front porch talking with then-Captain Presley of the Ramseur police department. While we were there someone drove past at well over the safe speed for our little residential street. Captain Presley explained to us that if signs were posted on our street he would be able to enforce a speed limit, so my neighbors and I requested signs. Several years later, after Jim McIntosh was elected to the board of commissioners, we finally got them. Unfortunately, higher-priority calls rarely leave time for police officers to linger in residential areas long enough to catch anyone speeding.

There are, of course, other ways we could address the speeding problem that do not require additional law enforcement, but this article isn’t about speeders on Church Street or the admirable job Chief Presley does with the limited manpower we can afford to give him. To enforce ordinances we need to make people aware of them, and the best way to make drivers aware of a law is to post signs. 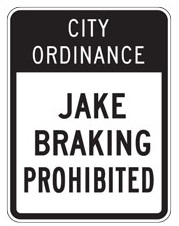 Back in 2019, then-Commissioner Randy Cox brought the board a proposed ordinance prohibiting truck drivers from using a loud braking method, commonly called Jake braking, inside town limits. The board of commissioners approved that ordinance.

A few months after that we had an election and Ramseur voters chose three new commissioners and a new mayor. The new mayor was then a commissioner with two years left in her term, so by early 2020 four new commissioners had been seated. We also hired a new town clerk/finance officer around the same time.

It’s never been the mayor’s job to keep up with administrative tasks, at least not according to the state legislature, and while a case could be made that it is the clerk’s job, she’s got a very full plate.

As far as I know, that anti-Jake braking ordinance is still on the books, but it seems to have been forgotten. No signs have ever been posted and without signs, it can’t be enforced. The new board members and administrative staff had much bigger issues to deal with when they took office almost three and a half years ago, but the fact remains; our board of commissioners passed an ordinance intended to make life in Ramseur a little more pleasant and the ball got dropped.

Almost every weekday morning between 6:30 and 7 A.M. a big truck rolls up Coleridge Road from south of town. The driver starts Jake braking around Foushee Road and continues all the way to at least Carter or Liberty Street. It’s so consistent – same distance, about the same time, almost every day – that it seems deliberate, and without posted signs, there’s not much police can do about it.

Don’t get me wrong, I’m not complaining. I live far enough off that road that we barely hear it inside our house, but I’d sure hate it if my home was up there on Coleridge Road, especially if I wasn’t an early riser.

This issue is yet another prime example of why we need a town manager; not an administrator, a manager.

A town manager provides consistency no matter what changes voters may make to the board of commissioners every two years, and a manager’s position is much harder for any board of commissioners to do away with than an administrator’s. All municipalities need that continuity and stability, and that is why most towns across North Carolina, large and small, have adopted the manager/council form of government.

City and county commissioners are elected to make policy decisions for others to carry out. In most places, responsibility for that “carrying out” falls upon a manager’s shoulders, and then filters down to department heads and employees.

Commissioners should never be expected to manage the day-to-day operations of a town; especially not for the $150 per month we pay ours. That’s why we must update our town’s corporate charter and hire a professional manager. The price of failing to do so is simply too high.

In my report about the board of commissioner’s meeting of January 17, 2023, I wrote: “Commissioner Parrish moved that the town stop sending appliances such as stoves, refrigerators, and water heaters to the county landfill, which incurs a significant expense, and suggested that instead, we begin sending those items and “anything metal” to Asheboro Recycling where they will pay us for many of those items; smart move.”

It has since been brought to my attention that our public works department had already been taking these large metal items and recyclable appliances to Liberty Recycling Center, where we were already being compensated for those items, for quite some time.

Commissioner Parrish should have known all this before he made his presentation last Tuesday night but made his argument as if it were some great new revelation. In truth, it seems this was anything but new information, and credit for these savings belongs elsewhere.