This is the third installment in a series of reports covering the Ramseur Board of Commissioners meeting that took place on 17 August 2021. Part one can be found here, part two here, and the full meeting as recorded by Commissioner Parrish, posted without commentary, is here.

After addressing old business carried over from previous meetings, the board moved on to new business for the remainder of the evening. The first new item on the agenda involved whether or not to refund a water/sewer deposit to a customer. This was necessary because the receipt proving that the deposit was paid has been lost (see the discussion about six years of poorly kept documents here). The decision was made to assume that the deposit had been properly paid and the board voted to refund the money.

Next, the board heard from Commissioner Parrish regarding a request from the Ramseur/Eastern Randolph Area Chamber of Commerce to utilize the ground floor of the former police department. The building, which also houses our museum, is in pretty bad shape due to years of deferred maintenance and neglect. Among other things, it needs a new roof very soon. The Chamber seeks to take over that space and hopes to begin making repairs inside soon. In exchange, the group offered to pay $50 per month to help defray any additional utility costs. A long-term lease was recommended and agreed to by the board.

Next, appointed commissioner, Joy Hooker, wanted to talk about “flyers” on the town website. Since the beginning of the coronavirus pandemic, our county health department has led the way in fighting the spread of Covid-19 in our county. According to the latest numbers I’ve seen the virus has now claimed the lives of 248 Randolph County citizens, and forever changed the lives of thousands more.

The first vaccines received approval for emergency use last December and by January were being given to those most at risk: the elderly, first responders, and essential workers. As of this writing, millions of doses of at least three different vaccines have been administered across this country, along with millions more around the world, with very minor side effects in all but a few cases.

A few months ago case numbers began falling in many places as more and more people were getting vaccinated and the virus found it harder to spread, but we are still struggling to reach a 70% vaccination rate nationwide. Falling numbers gave many of us a brief false sense of security, but in Randolph County, as in many other rural areas, we haven’t yet vaccinated 40% of the eligible population. Too many of our neighbors believe misinformation about the safety and efficacy of vaccines, so now we are all being asked to wear masks again to protect the unvaccinated among us. Meanwhile, new infections soar, almost exclusively among those who have refused to take a safe, effective vaccine.

From the start of the pandemic, our county health department has depended on county and municipal governments to assist them in getting information out to as many of us as possible. One way that happens is by posting information graphics on municipal websites, which our mayor has been doing, when asked, for roughly eighteen months. Until now not one commissioner has so much as blinked an eye about it.

That changed Tuesday night when Joy Hooker, appointed to a vacant seat on our board a few months ago, decided that the mayor should have sought permission before posting health department information, claiming that in doing so the mayor had violated the limits of her office. Hooker also stated that posting information supplied by the county health department amounts to town officials giving medical advice. Both of her claims are absolute nonsense and represent a clear threat to the health of every member of our community. Her ridiculous claims serve only to undermine a vital public health initiative that might mean the difference between life and death for one of our neighbors.

Backing Hooker’s position, Commissioner JC Parrish stated that if the town posts infographics from the health department encouraging vaccines, then we, our local government, are obligated to offer equal space to “the others”. When I asked Mr. Parrish to clarify who these “others” are, he stated that he referred to “anti-vaccine” advocates. Local governments are under no obligation to promote lies and conspiracy theories. We have Facebook for that!

The only thing Commissioners Hooker, Parrish, and McIntosh (all three voted to remove the graphics) succeeded in doing last Tuesday night was to make themselves look foolish.

At this point, it might be helpful to back up and review a little local history. Several years ago a resolution was passed and later overturned, in an attempt to rein in now-former mayor Danny Shaw after he was accused by previous boards of overstepping the limits of his office several times.

In one case Mr. Shaw had offered office space in the municipal building to Mr. Parrish’s chamber of commerce without clearing it with the board of commissioners. In North Carolina, a mayor has no vote on matters before the governing board unless the board deadlocks. Then a mayor can vote to break the tie. In that particular case, the mayor was indeed out of line. He should have sought the approval of the board before taking that action.

The resolution to further limit the mayor’s authority was poorly written and did little more than reiterate what North Carolina statutes already say: the mayor’s job is to facilitate meetings, sign official documents such as checks and contracts, and be the public face of the town.

A mayor is essentially the chief communications officer for any municipality in this state. Making sure local, county, and other official information is placed where citizens can easily find and read it is definitely part of that job. To my knowledge, Commissioner Hooker did not live in Ramseur during the time when Mayor Shaw had his power struggle with the former board of commissioners. She likely has no first-hand knowledge of the incident or the resolution other than what was written in the newspaper or what she has been told.

Mayor Caudle did not ask permission from the board prior to authorizing those health department graphics being displayed on the town website, and she should not have been expected to.

For the last year and a half, since the beginning of the pandemic, not one commissioner ever questioned anything Covid-related that she asked our webmaster to post. Humans make mistakes. It’s part of being human, but in this case, Mayor Caudle was right.

The information from the health department needed to be shared with our citizens. So what if that little blue graphic convinces someone to get a vaccine that might prevent them or someone they care about from ending up on a ventilator, or dying, or stuck living out the rest of their life with incurable complications from Covid-19? As I told the board members Tuesday night at the meeting if they can’t put aside their petty personal conflicts and stand behind our county health department they have no business making policy decisions for this town. 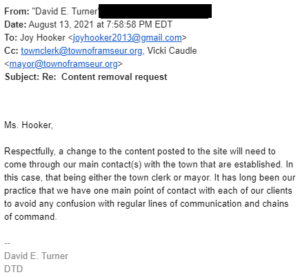 Now, I’m going to go out on a limb and tell you what I think was really behind this sad little episode of middle school drama, based on personal experience and watching most of these folks closely for the last several years. Mayor Caudle and Commissioner Parrish have been close friends, officers (treasurer and secretary) in the chamber of commerce, and business associates for several years now, but at some point in the past few months they had a falling out.

This business with the website started just before 8 PM on Friday night, 13 August, with an email from Joy Hooker to our webmaster, Mr. Turner, demanding the removal of the health department graphics from the town website. When Mr. Turner politely refused, Hooker’s email was followed about thirty minutes later by one from Mr. Parrish, reiterating the demand, and stating that “three commissioners have agreed to this.” Mr. Turner, to his credit, informed both these commissioners that it has been his policy from day one to have no more than two contacts in any municipal office with the authority to request the addition or removal of content from the websites he manages. 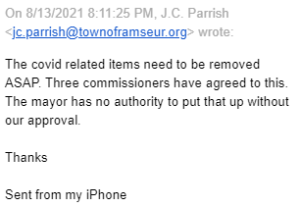 As the public face of this town, any mayor will always be well within his or her rights to share official information from any county department, especially something that could be a matter of life or death. If Mayor Caudle was a vocal anti-vaccine advocate (I do not know her opinion on vaccines, I haven’t asked) and had refused to post any information from our public health department, you better believe I would be on her case the same way I am now going after all three of the commissioners involved in this nonsense. 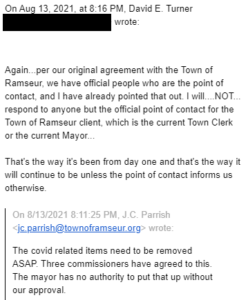 What is perhaps most troubling about this whole sorry episode is the reference Mr. Parrish made in his email to Mr. Turner, stating that three commissioners had “agreed” to Hooker’s demand. If an issue is important enough to require approval by the board of commissioners, that vote should only be taken in public during a properly called and advertised meeting. Even when the board meets in a closed session, if they vote on an issue they are required to return to open session and announce the action taken. Voting by email, text message, or voice over the telephone outside a legally called meeting is ILLEGAL, and everyone on that board knows that.

Several months ago, when Tim Matthews and Tanya Kenyon were still members of the board, I’m told that voting illegally by text or email had become a regular practice among some of the members. Once any three had agreed to a proposal, it seems reasonable to assume that the issue at hand could then be slipped through as part of the monthly consent agenda, and passed with little if any discussion at the beginning of a meeting. 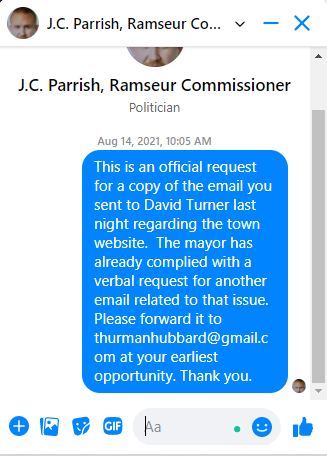 When one commissioner questioned the legality of this practice attorney Bob Wilhoit confirmed to the board that this manner of voting is indeed not the proper, legal way of doing public business. If nothing else it violates the spirit and intent of North Carolina’s public meetings statutes.

All of these officials, with the possible exception of Joy Hooker, were there when that was pointed out, so why are Mr. Parrish, Ms. Hooker, and, apparently, Mr. McIntosh, since he voted with the others to remove the vaccine information, still playing that game?

After the mayor had offered a compromise and a hasty vote was called, several citizens spoke out in favor of keeping the health department graphics on the website. Only Commissioner Tim Cranford represented the voice of reason that night. He voted against removing the health department’s message. I thanked him then and do so again now. The three remaining board members, McIntosh, Hooker, and Parrish, all voted to undermine our county’s public health initiative for no good reason.

I’ll cover the remainder of the meeting in another post later this week. Thanks for taking the time to read.