This is the last of four installments covering the August 2021 board of commissioners meeting. Part one can be found here, part two here, and part three here. The full video with copies of the agenda and an ordinance that was adopted that night can be found here.

After three commissioners voted to remove vaccine information, supplied by the Randolph County Department of Public Health, from the town website the meeting moved on to a short discussion and approval of renewing our membership in the Upper Cape Fear River Basin Association.

Next, the board addressed designating a local official to be responsible for reviewing ABC permit applications. Currently, former police chief Larry Lewallen is listed with the state ABC board as our designee. Commissioner Parrish suggested changing the designation to ‘current police chief and his or her second in command’ (“Captain”), based on position rather than a named individual. The board agreed to that proposal.

Then Commissioner Parrish introduced two invoices from the fire department totaling more than $18,000.00. These were approved for payment without objection. Neither of these items is listed on the official meeting agenda and I do not recall hearing them added at the beginning of the meeting. It’s important that the town pay its bills on time, but it is also important that such business be added to the agenda properly so that interested citizens may stay informed.

Commissioner Cranford then reported on his departments: cemetery, library, and museum. He discussed the very real need for an updated survey of Sunset Knoll cemetery, where we continue to have issues with mislocated burial plots. He also reported that the new library roof has a leak or two. The contractor has been notified and will come out soon to address the problem. Mr. Cranford also requested verification that funds were allocated in the current budget for lighting upgrades at the library and reminded the board members that they had previously discussed using “covid funds” to cover the cost of a new roof on the museum building. It was unclear whether he was referring to the ARPA funds or some other resources that may be available for that purpose.

Next, Commissioner Hooker spoke about parks and recreation. She addressed a planned memorial to Billie Joe Caviness at Leonard Park, and a proposed partnership with the high school to replace some deteriorated grills and add some benches at Ramseur Lake in exchange for a donation to the school. Ms. Hooker also mentioned the possibility of a new restaurant coming to Main Street, to be operated by the owner of the Cafe on Loach Street in Asheboro.

I think we’d all welcome a new eatery on Main Street, especially one operated by folks with such a well-established reputation for great food, but I question the idea of using public money – grants or otherwise – to do it with, which is what Commissioner Hooker sounded like she was suggesting. Government has no business funding private enterprise unless it’s to deal with an emergency, such as disaster relief or research into vaccines to combat a global health crisis. New eateries don’t fall into that category.

Commissioner Hooker then turned to her pet project; she wants to build an RV park at the lake. I could be mistaken but I believe the location is at or near the old waterworks. That area is actually closer to Franklinville. It’s certainly within their ETJ, and to my knowledge, Ms. Hooker has not taken this idea to any of their officials. Even if this became a joint project with both towns involved it’s still a horribly irresponsible idea.

An RV park, especially one that discriminates against tent campers, as this one has so far been proposed, would be a money pit. It would take decades to recover the development costs alone, not to mention the price of operating and maintaining it properly long term. We have far more pressing needs. For instance, we have two completed sections of the Deep River Rail Trail within our corporate limits. Both remain underutilized because the bridge needed to connect the short section near downtown with the longer section that terminates near US 64, behind Tower Components, remains unbuilt.

Finishing the rail trail should be a priority for our parks and recreation department. There are certainly many streets in town in need of resurfacing and upgrades to curbs, gutters, and sidewalks, I’m pretty sure Powell funds (pdf) could be used to help defray some of the cost of building that footbridge. Such a bridge would cost far less than an RV park and do far more to create recreational opportunities for the people of this community.

When I ran for office here in 2015 I talked to a few people about the desirability of bringing a campground or a hotel to the area, and working toward becoming a place where people could stay for a few days while they visit the NC Zoo in Asheboro, or Seagrove potteries, or attractions in Greensboro and other places around the area. I still believe that if we finish the rail trail, part of a much larger planned state trail system along Deep River, and fostered the development of an arts & entertainment district downtown, one day someone might be willing to invest in a campground or a hotel, but those are private sector investments; not something a little town with a  history of poor record-keeping and inept self-management ought to be doing.

Next, the commissioners held a discussion about fees for satellite annexation and re-zoning. They adopted a $350 fee for annexation, with an additional $150, totaling $500, for re-zoning. The board then voted to remove Marjorie Casey, who has apparently moved out of town without leaving a forwarding address, from the planning & zoning board. The alternate member of that board will now become a full member and a new alternate will be sought. Here’s a link to the application for anyone interested in serving. 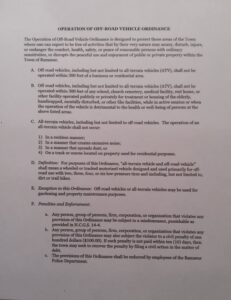 Next, the board voted on an ordinance regulating the operation of off-road vehicles in residential and other areas of town. It happened pretty quickly, so watch the video in the link above. A public hearing was held before the meeting and the ordinance was passed unanimously. Any person found in violation of this ordinance may be fined up to $100 per incident and enforcement is to be handled by Ramseur police.

I hope our police department will take a proactive approach to this and make an effort to inform the known ATV riders in the town of this change. Complaint-driven enforcement of ordinances like this only breeds animosity among neighbors and creates bigger problems requiring police intervention down the road. No one likes having to be the bad guy, but sometimes that’s an unavoidable part of keeping the peace.

The remainder of the meeting included a short presentation and Q&A with Brandon Emory from Alliance Code Enforcement, and a brief discussion about purchasing a Norway spruce tree to replace the Christmas tree in front of the municipal building, which mysteriously died a year or two ago.